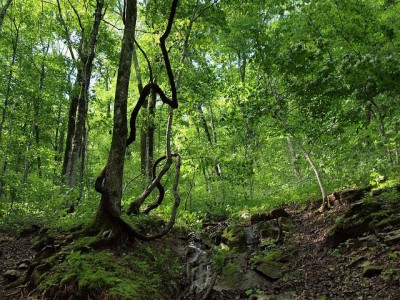 The fields are ripe for hunting. Almost 1,000 acres of land in Tennessee used to cultivate marijuana plants for more than a decade were seized several years ago from two people running a million-dollar multi-state wholesale drug distribution ring and are now open for use by outdoorsmen and women of all pursuits.

In 2006, Jeffory Carl Young, 55, of Cannon County, Tennessee and Morris Roller, 59, of Warren County were arrested in a sting by five law enforcement agencies, including local, state and federal authorities.

They were convicted in 2008 and since that time, debate had ensued as to what should be done with the reclaimed land on Short Mountain in Cannon County. The pristine land on one of Tennessee’s tallest mountains in a remote part of the state is home to certain species of wildlife not found elsewhere. Two species of crayfish, salamanders and beetles are unique to the area.

After the pair’s arrest, Neal Appelbaum, president of the Stones River Watershed Association immediately set in motion conservation propositions for the land. Keeping former marijuana-growing land open for the public and free from development following seizure is an unusual outcome (except for when the land-owners are unaware of the operation). It has no precedent in Tennessee.

“It’s irreplaceable land, it’s irreplaceable habitat, it’s unique to Tennessee,” said Neal Appelbaum to 9News. “The idea that this would have been sold off and developed never really made sense. But everybody had to come to the agreement that this is the right thing to do. Lots of people could have had reasons not to.”

Preservation of the land was not guaranteed until all agreements were made and deeds were signed April 10. Designation of the land as state land was the culmination of five and a half years of discussion, debate, negotiation, paperwork, process and ownership. In the end, state wildlife, environmental officials, sportsmen and conservationists alike were pleased with the outcome.

Now, all but a few parcels of the land already designated to a bible camp and a farming collective is open to hikers and hunters.

View the report from 9News along with scenery from the reclaimed land on Short Mountain below.