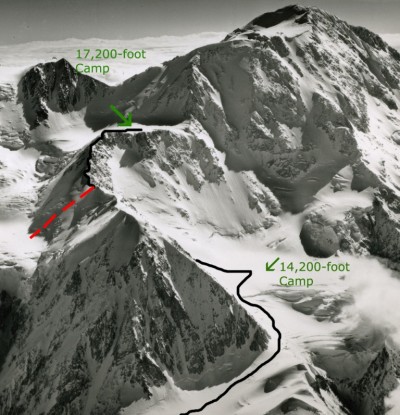 The black line represents the West Buttress route; the red line indicates the direction of the fall.

Denali National Park and Preserve mountaineering rangers were notified at 4:30 pm on Friday, May 18 that a member of a three-person climbing team had fallen from 16,200-feet on Mt. McKinley’s West Buttress route.  The un-roped team had just reached the top of the ‘headwall’ or ‘fixed lines’ section of the West Buttress route when one climber fell 1,100 feet down the north face of the buttress to an elevation of 15,100 feet on the Peters Glacier.   A witness to the event indicated the climber fell while attempting to recover a backpack that had started to slide downhill.

At the time of the fall, an NPS mountaineering patrol was ascending the fixed lines shortly behind the 3-member team.  The patrol quickly arrived at the fall site and immediately contacted fellow NPS rangers via radio to initiate a helicopter response.  At 5:15 pm, Denali National Park’s A-Star B3 helicopter launched from Talkeetna in clear, calm weather conditions. With two ranger-paramedics on board, the helicopter flew to the location of the victim.   NPS rangers confirmed that the climber had died of injuries sustained in the fall.  The body was recovered and flown back to Talkeetna. The identity of the victim is being withheld pending notification of family members overseas.

There are currently 336 mountaineers attempting routes on Mt. McKinley. Four climbers have reached the summit this season.  This fatal fall is the first serious incident on Mt. McKinley of the 2012 mountaineering season.