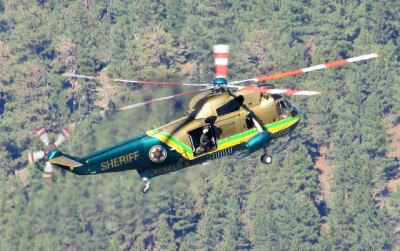 A New Hampshire Fish and Game (DFG) officer wants the hiker who “did everything wrong” to foot the bill for the rescue team that was dispatched on the lost hiker’s behalf. Department of Fish and Game Sgt. Wayne Saunders said a hiker from Sandwich, Massachusetts set out to hike Mount Madison late in the day on Monday with no food, no water, no hiking gear and no flashlight. He only had two t-shirts and a pair of knee-high rubber boots.

Mark Walsh, 49, only had one piece of gear – his cellphone. He lost track of Pine Link Trail and called wardens for help just before 6 p.m. Walsh had not eaten much all day besides Slim Fast and because temperatures are known to drop to the 30s in the mountains, Sgt. Saunders decided to send in a whole crew of rescue workers. Nine people responded from the DFG, Androscoggin Valley Search and Rescue Team and American Mountain Club searchers.

Rescuers finally found him “a good distance” off the trail at 11 p.m. that night. After his condition was evaluated, and he was given food and water, hiked back down the mountain, the time was 4 a.m. Sgt. Saunders had to attend a law enforcement course in Concord early the next day after just one hour of sleep. In an interview with the Union Leader, Sgt. Saunders vented his frustration at aiding the ill-prepared and careless.

“I am fed up, and it just doesn’t get through to people,” Saunders said. “We try to put it out to people; we talk about this stuff all the time. Maybe it’s just because we live around here and most of us know not to go in the mountains unless we’re prepared; I don’t know.”

The DFG has the option of recommending to the New Hampshire Attorney General’s Office that the state seek reimbursement for rescue services. Sgt. Saunders said he will definitely recommend that the department seek payment from Walsh.

On April 18, when the men didn’t show up for work. Kuhl’s girlfriend notified authorities. An extensive search was initiated. Touted as one of the most expensive searches in Grand Teton history, rescuers found the men six days after they were reported missing. Three more feet of snow fell, the rescuers were grounded many times because of bad weather and probing the snow with standard 10-foot telescoping metal poles was not enough to reach the skiers. In total, the rescue-recovery operation cost $115,000, more than double of any previous search on Grand Teton. After six days of one of the most costly search-and-rescue operations in Wyoming history, the two men’s bodies were recovered still tucked in their sleeping bags after a massive avalanche on April 16 buried them in 13 feet of snow.

The county coroner surmised that the two men died of asphyxiation within minutes of being covered. Rangers at the scene didn’t even find ice crystals near the men’s faces which means that the men were not breathing for any significant amount of time after the slide.

Typically, rescue operations are simple. They range from a child wandering away from his/her parents, a senior who becomes disoriented or boaters who have too much to drink.

Yet in total for 2009, Park Service workers across the nation conducted 3,568 search and rescues that cost a total of more than $4.8 million. The remote and rugged parks are the costliest. Alaska’s Denali National Park has had three prolonged searches that cost between $118,000 to $132,000. Some officials have pointed out the fact that none of the people rescued paid the bill and neither did the families of Kuhl nor Seftick.

In a particular point of contention, taxpayer dollars covered the costs. The FAQ on Grand Canyon’s website says that emergency rescue operations are covered by the taxpayer, but those rescued must pay for any ground ambulance transport or supporting commercial aeromedical transportation.

In light of the national budget crisis, Denali and other parks have explored the idea of charging an additional “special use” fee for high-risk dangerous adventures. Denali even proposed a $500-per-climber fee to scale the peak that the park is named after.

Climbing organizations contend that $500 is too much, but say that a fee is not a bad idea.

A former risk assessment officer with the Park Service in Washington, D.C. and current Recreation and Tourism Studies Professor at the University of North Dakota, Travis Heggie said he thinks the cost of such rescue operations is much higher than the published figures. “I think if all the dollar figures were added — such as hidden equipment wear-and-tear and medical costs — there would be a doubling of the true search and rescue figures,” he postulated.

Moreover, the problem is not the money, which even at the $10 million mark is a fraction of the National Park Service’s $2.75 billion annual budget, but the greater issue is that it takes away money from other valuable programs.

Currently, the money to fund search-and-rescue is taken from general funds, but Heggie argues that there should be a fund set aside for those operations since it’s inevitable that they will happen.

Others have proposed that high-risk adventurers be required to arrange private travel insurance that will pay for search, rescue and medical treatment as European climbers do.

But some of the most experienced rangers are opposed to charging those who they rescue. Park Service Spokesman in Washington D.C. Jeffrey Olson told WyoFile, “our policy is that if we start charging for search and rescue, people would not ask for help or would delay asking for help.”