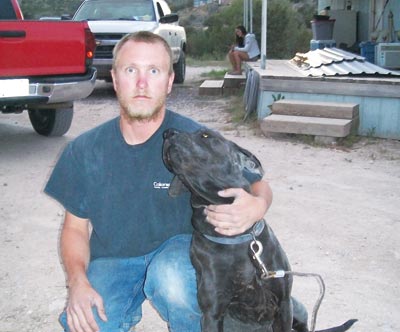 A mountain lion that ran through a group of campers and attacked their dog before being killed by a member of the group has tested positive for rabies.

The incident occurred Friday, May 4, in a remote area of the Tonto National Forest just downstream of Sheep Bridge along the Verde River, near the junction with Bloody Basin Road.

The group of four was having breakfast in their camp at 6:30 a.m. when a mountain lion ran out of the bushes and attacked their dog, a 90-pound pit bull and Labrador retriever mix.

As the fight between the mountain lion and dog moved from the camp area into some nearby bushes, the owner went to his dog’s defense and hit the lion over the head with a cast iron skillet. Another member of the group then shot the lion in the head with a pistol.

A member of the group was able to contact the Arizona Game and Fish Department via cell phone. A wildlife officer was dispatched to the scene, conducted interviews, and picked up the mountain lion carcass for transport to the Arizona State Health Laboratory for disease testing.

While the young female lion appeared healthy, the lab confirmed yesterday that the lion was rabid.

The dog received multiple puncture wounds and scratches that were not life threatening. It was reportedly current on its vaccinations, but will be placed under quarantine for a set period of time as a precaution.

None of the people in the group were bitten or scratched by the mountain lion.

Records from the Arizona Department of Health Services (ADHS) show that this is only the third lab-confirmed case of rabies in a mountain lion in Arizona in the past 10 years.

Still, officials advise people to be aware of their surroundings and nearby wildlife activity when recreating outdoors, to keep their distance from wildlife and make sure their pets are vaccinated.

In Arizona, the wildlife in which rabies most commonly occurs are bats, skunks and foxes, but any mammal can contract the disease. This year 11 animals—six skunks, three bats, one fox, and now, one mountain lion—have tested positive for rabies at the Arizona State Health Laboratory.

“People need to pack up a good dose of common sense when they head out into the outdoors,” says Will Humble, ADHS director. “If a wild animal is coming around, stay away from it. Chances are good it is sick or rabid. If you are hurt or exposed, you should get medical attention right away. If the animal has or had rabies, people can’t wait to start showing symptoms.”

Rabies is a disease that affects the nervous system and is transmitted through the saliva of the host. Exposure often occurs via a bite but may take other avenues. It is not unusual to have multiple cases of rabies occur in an area, depending on the strain of rabies involved. Rabid animals may show unusual behavior such as being bold or appearing unstable with awkward movements. Rabid carnivores, such as skunks, foxes, bobcats and coyotes, may become aggressive and attempt to bite people, pets and livestock. Wild animals exhibiting unusual behavior should be reported to the Arizona Game and Fish Department or local animal control officials.

Examples of unusual behavior include: wild animals that show no fear of people and pets; nocturnal animals that are active during daylight hours; and bats found on the ground, in swimming pools, or that have been caught by a pet. Aggressive behavior such as unprovoked attacks on either pets or people may also indicate an animal is rabid.

The Arizona Department of Health Services and the Arizona Game and Fish Department recommend the following precautions to reduce a chance encounter with a rabid animal:

“Outdoor recreationists should not have an undue fear of the possibility of rabies in wildlife,” said Justice-Allen. “Enjoy the outdoors, but be attentive to your surroundings, and enjoy wildlife from a distance.”

It is also advisable to keep abreast of health department disease warnings, and recreationists may want to consult these advisories prior to departing for the field.

For more information about living in mountain lion country, visit the Arizona Game and Fish Department’s website at www.azgfd.gov/urbanwildlife.