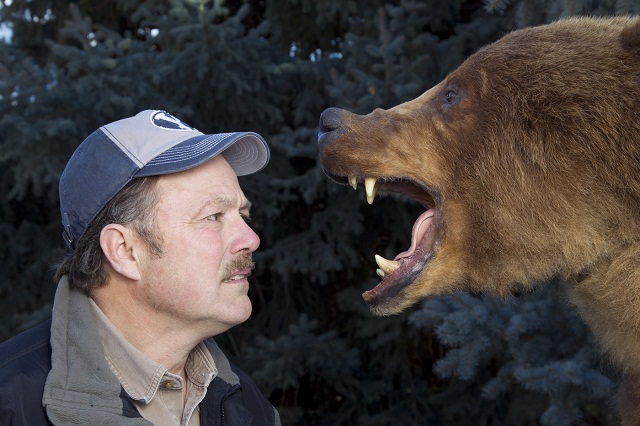 Dr. Tom S. Smith, BYU bear biologist and one of the authors of the studies. Photo: Mark A. Philbrick

A firearm may seem like a more reliable item to carry in the backcountry than non-lethal spray, but according to two recent studies, firearms are no more effective than self-defense spray when it comes to handling bears. Two studies led by Brigham Young University Bear Biologist and Associate Professor of Wildlife Science Thomas S. Smith concluded that firearms don’t guarantee protection. The studies also said that a gun is no more effective in keeping people from injury or death during bear attacks than those not using a firearm.

The 2008 study stated that bear spray effectively halted aggressive bear behavior in 92 percent of cases. A sampling of 83 bear spray incidents between 1985 to 2006 was conducted. Seventy-four percent were brown bears, 24 percent black bears and 2 percent were polar bears. “Of all persons carrying spray, 98 percent were uninjured by bears in close-range encounters,” the study abstract says.

All injuries associated with defensive spray were relatively minor, no hospitalization was required. In 7 percent of cases, wind was reported to have interfered with accuracy, although it did reach the bear in all cases. Fourteen percent of spray users reported a range of side effects upon themselves, for example, minor irritation (11 percent) up to near incapacitation (3 percent). There were no reports of spray malfunction in all incidents.

Building on the conclusions of the 2008 report, the 2012 study analyzed 269 incidents of bear-human conflicts involving firearms in Alaska between 1883 to 2009.

The study abstract says, “We found no significant difference in success rates (i.e., success being when the bear was stopped in its aggressive behavior) associated with long guns (76%) and handguns (84%). Moreover, firearm bearers suffered the same injury rates in close encounters with bears whether they used their firearms or not. Bears were killed in 61% (n = 162) of bear–firearms incidents.”

There were additional reasons for firearms failing to stop an aggressive bear. Consider that bear attacks may come as a surprise and are probably poorly timed for all parties involved. The researchers said that predicting a successful outcome for firearm use depended on the species and number of bears present, human activity at the time of encounter, whether the bear charged and whether fish or game meat was present. Firearm variables (type of gun, number of shots) were not useful in predicting outcomes.

“Although firearms have failed to protect some users, they are the only deterrent that can lethally stop an aggressive bear… Our findings suggest that only those proficient in firearms use should rely on them for protection in bear country,” according to the study.

Smith and his co-authors argue that using firearms in bear encounters is difficult even for experts because of the need for split-second decisions and accuracy. Therefore, he suggests carrying non-lethal bear deterrent spray, which is essentially a large can of pepper-spray that sprays a cone-like mist for up to 20 to 30 feet in front of you. Smith’s study suggests that it is easier to deploy, is less cumbersome and its success rate is higher than guns.

So if you anticipate a potential bear encounter on your next hiking or camping trip, a can of bear-deterring spray may be a good item to reach for before you go for your bear gun.  For even more comprehensive information on preventing or reacting to a bear attack, read Bear Encounters: How to Properly React on Outdoor Hub.