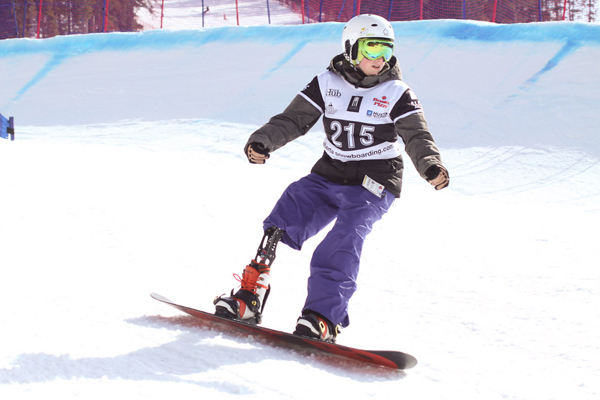 For the first time in the winter Olympics, para-snowboarding will be included as a medal event at the next Olympics in Sochi, Russia in 2014.

Below is a short documentary on para-snowboarder Byron Raubenheimer. He talks about his situation that left him without part of his leg, how he got into snowboarding and what is different about the sport for para-boarders.

Original press release issued by the International Paralympic Committee on May 2, 2012:

The International Paralympic Committee (IPC) has announced that two medal events in Para-Snowboard will be included in the Alpine Skiing programme at the Sochi 2014 Paralympic Winter Games.

This brings to 72 the number of medal events at the Sochi 2014 Games and is the first time that Para-Snowboard events have been included in the Paralympic programme.

Originally called Adaptive Snowboard, the sport is practiced worldwide by hundreds of athletes.

Xavier Gonzalez, the IPC’s Chief Executive Officer, said: “Snowboard is a fast paced and extremely exciting sport and we are delighted that it will form part of the Alpine Skiing programme at the Sochi 2014 Paralympic Winter Games.

“I would like to thank Sochi 2014, NPC Russia , Russian Government, the World Snowboard Federation and the IPC Athletes’ Council for all supporting the inclusion of these two extra medal events.

“It is important for the growth of the winter Games that there are more sports and more medal events to contest. I am particularly looking forward to see how athletes perform in this exciting new discipline and believe it will prove extremely popular with spectators and TV viewers alike.”

Dmitry Chernyshenko, President of the Sochi 2014 Organizing Committee, said: “Snowboarding is a young and exciting sport and one which is attracting new audiences and participants everywhere.

“Its inclusion in the Paralympics programme will give a further boost to the promotion of Paralympic sports across Russia and highlights the opportunities that sport provides to everyone. It also reflects our determination to deliver the most innovative and successful Olympic and Paralympic Winter Games in history.”

Gunnar Tveit, World Snowboard Federation (WSF) President, said: “The WSF are thrilled by the decision to include Para-Snowboard in the Paralympic programme of the Sochi 2014 Winter Games. Together with the IPC, the WSF National Snowboard Associations, and riders, we have been working towards this goal for the last six years.

“Knowing that the riders will have the chance to compete in the sport they love in 2014 is rewarding not only because the athletes will be recognized for their hard work but also because the inclusion of Para-Snowboard in the Sochi 2014 Winter Games will provide an unprecedented level of exposure to the sport.”

Gold in the men’s standing class was taken by the USA’s Evan Strong who finished ahead of New Zealand’s Carl Murphy and fellow American Mike Shea. The women’s gold was won by Bibian Mentel of the Netherlands, whilst silver and bronze went to USA’s Amy Purdy and Italy’s Sara Dorigatti respectively.

February’s event also included the sitting category for the first time, which is contested by riders with physical impairment such as paraplegia and bilateral lower extremity amputation.

The qualification criteria for the Sochi 2014 Paralympic Winter Games will be published on Monday 28 May 2012.