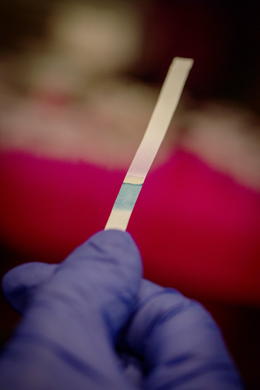 Researchers at McMaster University have developed a rapid testing method using a simple paper strip that can detect E. coli in recreational water within minutes. The strips are coated with chemicals that react to the bacteria and change colour to indicate its presence. The new tool could can close the gap between outbreak and detection, improving public safety. Photo by JD Howell.

Bacteria like E. coli and other harmful pathogens can be deadly, especially in a crowded swimming pool or water source. Scientists at McMaster University in Ontario developed an on-the-spot contamination detector to help prevent dangerous outbreaks.

Much like pH strips from your high school chemistry class, scientists developed chemical-laced paper strips that detect a range of levels of contamination when dipped into the specimen. Within three minutes, the coloration of the paper will determine whether harmful coliform bacteria are present and in what concentration, meaning outbreaks among swimmers can be minimized.

The product also has potential uses for campers and hikers swimming in or drinking from unfamiliar ponds, creeks or rivers to ensure their watering hole is safe. Survivalists and bug-out bag builders should consider keeping a few in their packs as well.

The strips should be on the shelf within two to three years.

Urban beach closures due to coliform outbreaks have become disturbing signs of summer, yet water-testing technology has never been fast enough to keep up with changing conditions, nor accessible enough to check all waters.

Now, researchers at McMaster University have developed a rapid testing method using a simple paper strip that can detect E. coli in recreational water within minutes. The new tool can close the gap between outbreak and detection, improving public safety.

Scientists from the Sentinel Bioactive Paper Network have created and validated the viability of the test strip, which can detect potentially harmful concentrations of E. coli in water quickly and simply, with much greater accuracy than existing portable technology.

The work is described in a paper published online in the journal Analytical and Bioanalytical Chemistry.

“Coliforms are always a big problem,” says the paper’s lead author John Brennan, a McMaster chemistry professor who holds the Canada Research Chair in Bioanalytical Chemistry. “The methods used to detect outbreaks are slow, and tend not to be portable, as they often need a lab-based amplification step prior to testing, causing a time lag between an outbreak and a beach closure.”

The Natural Sciences and Engineering Research Council of Canada funds Sentinel, a strategic research network that spans the country and is based at McMaster. Several dozen researchers are involved in its initiatives.

Bioactive paper is both old and new, Brennan explains. Since the late1950s, physicians have been using bioactive paper to test for glucose in urine. In the last several years, the area has expanded quickly and research has become very competitive as scientists work on new applications.

The new strips are coated with chemicals that react to the bacteria, and are printed using inkjet technology similar to that found in standard desktop printers. Within 30 minutes of sampling, the paper changes colour to indicate the presence of E. coli, with colours coded to represent different forms and concentrations of the bacteria.

In the future, the test should make it possible for consumers to check their water affordably and easily, without additional equipment, scientific knowledge or long waits.

“One of the problems right now is that there is no simple, fast and cheap way to test recreational water, and certainly nothing out there in the realm of rapid tests for drinking water,” Brennan says.

Field testing of the prototype strips is planned or under way in Canada and across the globe, in regions where untreated water poses particular health hazards. The results of these studies will help to refine the test strips and may lead to strips that are sensitive enough to tell whether water is safe enough to drink, says Brennan.

The standards for safe drinking water are hundreds of times tighter than those for safe swimming water. Typically, limits for safe swimming allow for a maximum of 100 to 500 cells in 100 mL of water, depending on jurisdiction. For water to be considered safe for drinking, there cannot be even one cell in 100 mL – a little less than half a cup of water.

The next stage of pre-commercial development of the test strips is already funded by NSERC through a Phase I Idea to Innovation grant. Commercialization of a final product could take as little as two to three years.