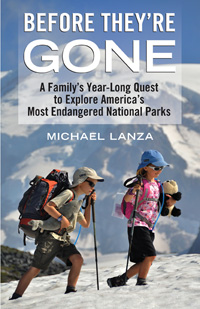 Environmental change and other factors are threatening many of America’s national parks and landmarks. The vulnerability facing the USA’s storied landmarks prompted writer Michael Lanza to write about the impending perils.

Through his review of myriad research, in conducting interviews with dozens of scientists and seeing the changes firsthand, Lanza is convinced that climate change could be detrimental to the places he and millions of outdoor enthusiasts love in the very near future.

Lanza is also the Northwest editor of Backpacker Magazine. His new book is published by Beacon Publishers.

Check out a video about the book below.