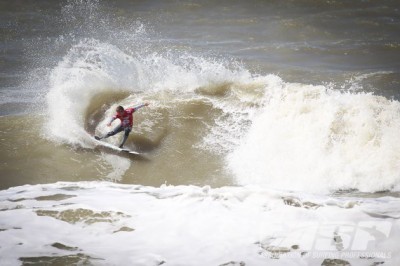 The opening day of the ASP 3-Star Protest Vendee Pro ran through the first two rounds of competition on two different sites. This morning eight heats were surfed at the secondary site of Les Dunes in choppy 4-5Ft waves , before the decision was taken by event officials to move back to the main site of La Sauzaie for the rest of the day. La Sauzaie turned on with the incoming tide in the afternoon offering cleaner 4-5Ft lefts and rights on the famous reef of Vendee.

Pablo Gutierrez (ESP) 30, was the in-form surfer of the day displaying speed, power and flow, three qualities highly recommended to impress the judges in competition. The Spanish veteran impressed in the difficult conditions by powering his way through a heat against younger competitors.

«This morning the conditions were difficult with a little bit of size but an onshore wind.» Said Pablo. «It was kind of a lottery out there, you could either surf good waves or not find anything at all. The paddle out was pretty exhausting it took us about 10mn to get out there, so it was definitely extreme !»

With a solid backhand and fronthand attack on the mid-sized swell on offer at the back-up venue of Les Dunes, Pablo Gutierrez managed to score the highest single wave score of the event so far, an impressive 8.67 out of 10, as well as the highest heat total of the event with 16.57 points.

«I had a good left of about 4-5Ft (1m50) that let me do two big manoeuvers on a clean open face and it was scored a 8.67. Then I had the whole 10mn paddling act all over again, and I managed to find a righthander that didn’t look like it was going to offer anything special. I started with a good cutback and it reformed in the inside section so I got to place three off-the-top manoeuvers that scored 7.9. So I guess I was pretty lucky this morning !»

A semi-retired surfer with a lot of experience on the ASP European Tour that he’s been surfing from the past fifteen years, Pablo Gutierrez prefers to not look ahead to a complicated Round 3 match-up against Justin Mujica (PRT) another seasoned European surfer.

«I never look at the next heat I’m going to surf. I know that because I’ve won this Round 2 Heat I’m going to be third in the next one and all the heats are difficult anyway. Sometimes the hardest your opponents the easiest the Heat because you’re giving everything you have and it can go your way, and the contrary applies too. I’m taking it heat by heat, I put on the lycra, go out, do my job and hopefully everything turns out alright !»

Luis Eyre (GBR) 19, was another standout today, posting two waves scored 7.5 to take the second place right behind Pablo Gutierrez. The Junior surfer residing in Portugal was consistent and displayed his strong progressive surfing repertoire to qualify for the third Round of competition.

«I don’t know Pablo personnaly but I know how good he is.» Stated Luis. «He was sitting right about 50m further to the right on a different peak and I saw he got a really long left with a big score and a smaller right but another excellent score. I just wanted to make the main round cause I missed the automatic qualification by just one seeding spot so I really wanted to make this first heat and go onto the next round. I’ve got a pretty solid heat coming up next so there’s not too much pressure on me I’m one of the youngest guys in the event.. I just want to have a good heat and try to maybe beat some of the older guys !».

Extremely active during the off season in Portugal where he lives, Luis Eyre has been releasing monthly video clips showing his progression throughout the winter. Coming off a difficult 2011 season on the ASP European Junior Tour, Luis is looking forward to his last Junior shot at making the top ranks.

«I didn’t travel like everyone else this winter cause I’d spent enough time away the previous summer and I really wanted to stay home. We had an offshore winter which was the first time in years so I stayed at home surfing and training a lot. I feel a bit more solid this year, I’ve been doing a lot of physical training and surfing a lot with the good guys at home like Gony Zubizaretta and Rowan Aish who’s in his heat now.. So it’s good to see them in the water and surf with guys that surf better than you, it helps a lot pushing your level !».

Lars Musschoot (BEL) 25, was the first Protest Team Rider to surf and qualify for the next Round, finishing second to Frederic Robin (FRA) in their Round 2 bout this afternoon on the main site of La Sauzaie. The famous Vendeean reef delivered cleaner waves but the navigation between big sets was difficult for everyone.

« I was completely lost out there, there were waves everywhere !» Commented Lars. «I looked at it and I saw a lot of righthanders breaking in the inside before my heat so I went out there looking for them but once I got there I felt just lost and didn’t find anything ! I’m pretty lucky to get through with two low scores, hopefully tomorrow the waves will be a bit better and I’ll surf better. It’s amazing just being here. Almost everyone surfing for Protest is here and hopefully we can all make a couple heats !»

Lars Musschoot originating from Belgium is used to cold water conditions and has developped interest for remote locations and extreme temperature. The event main sponsor Protest, just started releasing a new webseries starring Lars and the other Protest team riders.

«We’re doing a project with Protest that’s called ‘Stories from Here to There’ and it’s really cool I’m doing this trip from Norway to the South of Portugal, so I have a lot more travelling to do.. But for sure I’d like to mix it up a little with events during the year !».

The official next call is set to 9am tomorrow Friday, April 20 at the secondary venue of Les Dunes for an early start of the third Round of competition. Top seeds will enter this new round including 2011 European Champion Romain Cloitre (FRA), and more Protest riders: Yannick De Jager (NLD), the 2011 Protest Vendee Pro winner Tim Boal (FRA) and more.
The Protest Vendee Pro is scheduled from April 19-22, 2012. For more information, and all upcoming results, photos, video highlights, press releases and LIVE webcast log-on to www.aspeurope.com