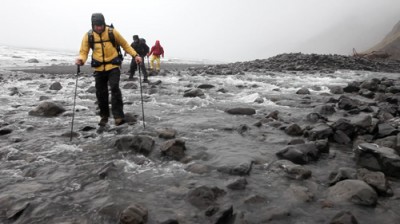 Yakima – the innovation leader in vehicle racks and cargo solutions – and outdoor gear and adventure website GearJunkie.com are showcasing off-the-beaten-path adventures at iconic destinations around the United States through an original short film series, “Off the Map.”

In each of the series’ five episodes, journalist and GearJunkie founder Stephen Regenold take viewers on a unique adventure tour at some of America’s most iconic outdoors destination, including the sea caves of Lake Superior, the Lost Coast of Northern California, the Maah Daah Hey mountain biking trail in South Dakota, and other locales.

But “Off the Map” doesn’t tour the usual, overcrowded routes. With the on-camera assistance of local guides, wilderness experts and other personalities, Regenold brings viewers into places that are rarely visited and little-known. New episodes will be released each month through August 2012.

“We wanted to reveal some epic, hidden adventures across the US, and to inspire people to get off the beaten path,” said Ashley Williams, Yakima Marketing Manager. “With their stunning photography, these short films show exactly how breathtaking our country is, and how worthwhile it is to go that extra step, to leave the crowds, parking lots and port-o-potties behind, and really go off the map.”

“We are psyched to partner with Yakima for this video series,” said Stephen Regenold. “The company’s products, including items like the SkyBoxPro 16 rooftop cargo box and the DoubleDown Ace bike hitch, let me and my crew easily get all of our gear to each new adventure.”