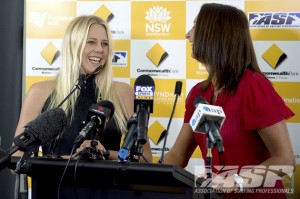 Today is the first day in the 2012 Commonwealth Bank Beachley Classic event window, with stormy sea and strong winds event organisers have called a Lay-Day. Stop No. 4 of 7 on the 2012 ASP Women’s World Championship Tour, the Commonwealth Bank Beachley Classic offers valuable ratings points in the race for the ASP Women’s World Title.

Layne Beachley, seven-time ASP Women’s World Champion and Commonwealth Bank Beachley Classic contest director is excited about a favourable surf forecast for the coming days. The swell charts are showing a solid swell in the eight foot (2.5 meter) plus range, that will more than likely see competitors take on the world famous Dee Why point.

“We’re seeing torrential rain squalls and strong gusty winds,” Beachley said. “The swell is building which is promising because yesterday it was as flat as a lake. We’ve called the competition off for the day, but we’ve got a really good forecast for the next few days. It’s looking really good for Thursday, Friday and Saturday. It’s exciting having the Top 17 women’s surfers in Sydney. For the last three months I’ve been thinking ‘why am I doing this?’ But then we get here and set up and I’m so proud of the event. We’re in our seventh year and I’d love to do it for at least 10 years.”