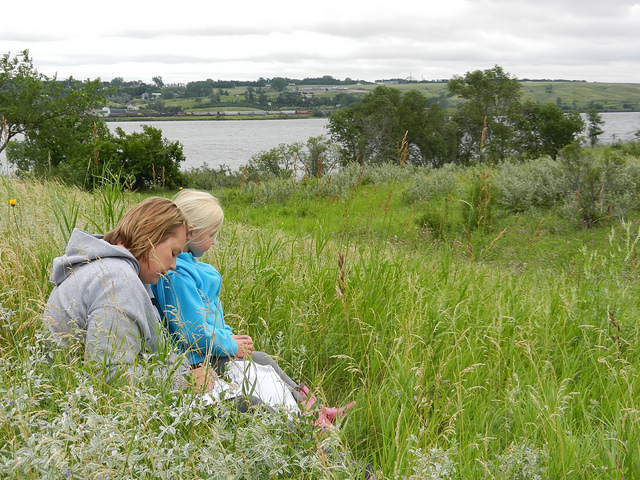 Educators have devised an initiative in response to the phenomenon known as “nature deficit disorder” that researchers say is responsible for diminishing the senses and stimulating physical and emotional illness.

In order to get children back in tune with the outdoors, some educators have integrated “place-based education” into schools. Otherwise known as outdoor education, educators are taking the classroom into the outdoors to work on community projects and build children’s appreciation for the outdoors.

The report below reveals some shocking statistics about children’s time indoors and in front of the television.

By the age of five, the average child will have watched just as many hours of television as the class time it takes to earn a college degree.

“In essence, a five-year old has the equivalent of a college degree in television watching,” said Tom Occhipinti. “The youngest generation today is not getting outdoors at all, they’ve got too much indoors to keep them busy.”

Occhipinti is the environmental education coordinator for the Michigan Department of Environmental Quality. His program produces environment-related teaching materials for educators across the state.

Television, computers and video games keep kids inside at an unhealthy rate, Occhipinti said. Studies have linked the lack of outdoor activities to problems such as obesity.

To address what is sometimes referred to as Nature Deficit Disorder, Occhipinti and others develop teaching supplements that integrate more outdoor education or “place-based education” into schools.

Getting more kids to spend more time outside is a state, regional and national effort, he said.

Place-based education is all about reestablishing kids’ connection with the outdoors, said Mark Stephens, a hub coordinator for the Great Lakes Stewardship Initiative.

The initiative established in 2007 has eight regional “hubs” around Michigan. It partners with K-12 schools and community members to expand environmental education and stewardship through hands-on projects. Funding comes from the Great Lakes Fishery Trust, an organization that provides funding to non-profits and educators to preserve Great Lakes fishery resources.

Stephens coordinates the GRAND Learning Network hub. The name stands for Grand River and nature discovery and it focuses on the Grand River watershed region.

The hubs work with people and groups to get kids outside, working on projects that they’ll not only learn from but that will also benefit the community and develop their appreciation for the outdoors.

The program starts in kindergarten. It’s important to get kids outdoors early so they can develop an appreciation for it, Stephens said. The early start leads to civic-minded students and increased time outdoors.

Students have done everything from build wood duck boxes for local zoos, participated stream velocity management projects and have cleaned up riverbanks and neighborhood storm drains. These cross-curricular projects are intertwined with core education subjects like math and social studies.

Kids are going outside not just to play but to learn and improve the community while at the same time indirectly addressing Nature Deficit Disorder, said Mary Whitmore the Great Lakes Stewardship Initiative developer and coordinator.

Both Stephens and Occhipinti said there are health benefits to place-based education as well.

Outdoor education tends to be more dynamic, giving kids an opportunity to move around more, which confronts the issue of obesity, Stephens said. Hyperactive students tend to be calmer when they’re learning outside.

The results of program has influenced some teachers who now start every school day with a short trip outside, he said.

A 2003 study from the University of Illinois at Urbana-Champaign concluded that activities held outdoors reduce attention deficit hyperactivity disorder (ADHD) symptoms in children.

The study, A Potential Natural Treatment for Attention-Deficit/Hyperactivity Disorder: Evidence From a National Study, found the results to be consistent across age, gender, location, income and diagnoses.

At the national level, the No Child Left Inside Coalition, comprised of more than business, health, youth, environmental and educational groups, is pushing for legislation that would allocate more federal funding toward environmental and place-based education.

The coalition has dozens of members throughout every state in the Great Lakes Region.

Even though there are numerous groups pushing place-based education, Whitmore said David Sobel, who helped develop the educational concept, said the Great Lakes Stewardship Initiative is leading the nation in the endeavor.

Speaking to the praise received by Sobel, “There are no other states that do what we do,” Stephens said. “We’re trying to change the culture of schools and it’s really catching on and gaining steam.”