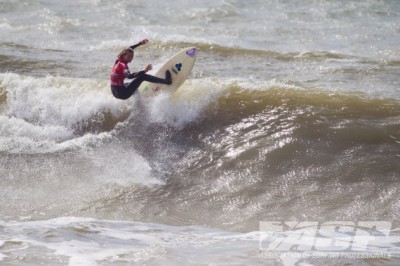 Bianca Buitendag was the in form surfer of the day, scoring both the highest single-wave of the event and the best heat-total, an impressive 15.90 out of 20 in testing conditions. The South-African stepped out of her comfort zone to succeed in cold water and an extremely windy line-up.

“To be honest this is probably some of the worst conditions I’ve surfed in my life this morning when we got here.” Buitendag said. “With the high tide it picked up a little bit and there were a couple of fun ones you could do one or two turns on. It’s a typical beachbreak, you never really know where to sit and you just hope to catch it when something comes your way. The lefts were looking better cause the wind blows straight into the rights and it keeps you off! This is the coldest water I’ve ever been in in my life. I had to surf four times today and every single time when you have to put your head underwater it feels like an ice block !”

Against a French trio of seasoned European competitors, Bianca Buitendag imposed her power and style and dominated the final, leaving her opponents searching for big scores in conditions that didn’t offer much scoring potential.

“I’ve been travelling with Johanne for three months in Australia and I’ve known Maud since I was about 15, so it was really good to compete against them.» Continued Buitendag. “I’m going home for three weeks now, and when I come back I’m doing the Swatch Girls Pro so that will be interesting to see !”

Clinching the second place today was Johanne Defay (FRA) 18, the 2011 ASP Europe Junior Women’s Champion and World Junior Title runner-up. Johanne displayed great surfing in the final heat of the day, but couldn’t match the South-African in her wave selection.

“It was a very hard day today, coming from Reunion Island I’d never worn boots before today but it felt alright and it ended good for me with a 2nd place result.” Defay said. “The final was my best heat I’m happy that I found more waves than in the previous heats. We had a lot of in that final! I think it was pretty close between all of us. I didn’t see any of Bianca’s waves but I know how good she is. I got a 4 on a wave that I wish had opened up a little more because it had potential, but all in all it was a good event for me.”

In an consistently happy mood, Johanne Defay managed to find the positives in today’s tough seas.

“The good thing with this sort of conditions is that you don’t see your opponents so there’s no hassle or anything. Those three girls are my friends so in this situation you need to leave your feelings on the beach during the heat, which I’m not the best at but it was fun.”

Maud Le Car (FRA) 19, ended up taking the third spot in the final today in what was a deceiving first result for the 2011 European Junior runner-up. Coming off strong after a long winter break in the Caribbean and a first win in a local event in South-West France, Maud didn’t manage to confirm her great form today.

“We completed the whole event in one day and it was really cold.” Said Maud. “The wave selection was essential and I got caught up a little, specially with the strong rips. It was very physical and I wasn’t at my best. I often surf with Johanne and Bianca in events, and I knew that Bianca is really good in any type of conditions, she was a really complicated opponent today! I’m a little disappointed but the Swatch Girls Pro France is coming up soon and I hope I’ll get a better result there, especially in the Pro Junior event.”

Josephine Costes (FRA) 16, was the youngest competitor in today’s final of the Bréti Girls Pro Junior. The Hossegor resident had to face unusal conditions and fought hard to qualify through three heats before surfing the final heat of the day. She collects her best result ever on the ASP European Junior Tour, a 4th place result, and will be one to watch in the future.

“When I arrived this morning and saw the horrible waves it was hard to get motivated but this is my first final in a Pro Junior so I’m super happy and I hope it continues,” Said Josephine. “I surfed four heats today in this cold water, and in the final I knew the other girls from other Pro Junior events, and I knew they’re really strong competitors. I’m looking forward to the next events of the season and trying to surf other finals like today!”