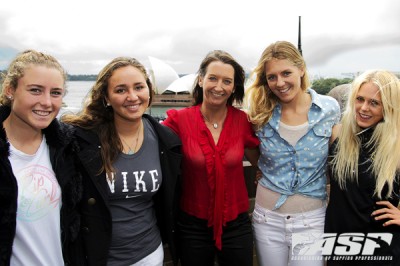 This morning the world renowned Sydney Harbour played host to the official launch of the 2012 Commonwealth Bank Beachley Classic. Seven-time ASP Women’s World Champion, Layne Beachley welcomed the surfers and media to the seventh annual Commonwealth Bank Beachley Classic, the event that offers the richest prize purse on the ASP Women’s World Championship Tour, with USD$130,000 on the line.

“Last year was one of the most valuable years of my entire life,” Gilmore said. “I learnt that you can overcome things and comeback stronger. Last year my heart wasn’t in it 100%. I was focusing on different things. This year I’m loving being on tour, I love surfing with all the girls. We’re all pushing each other to new heights and I think women’s surfing is in a really good place.”

Layne Beachley is proud to host the Commonwealth Bank Beachley Classic in her hometown of Sydney, and is looking forward to a promising surf forecast.

“The surf is looking good for Thursday, Friday and Saturday,” Beachley said. “It’s looking like we might have six foot waves at Dee Why point again this year, but mother nature is in charge and we will see what happens. It will be some of the most challenging waves the girls will face all year and I’m looking forward to seeing them out there.”

Carissa Moore (HAW), 19, reigning ASP Women’s World Champion, is excited to be to be back in Sydney and defend her title as defending Commonwealth Bank Beachley Classic event champion.

“It’s great to be here in Sydney,” Moore said. “It’s a beautiful city and I love coming here. I think that coming into the season as defending ASP Women’s World Champion is definitely different than chasing after a world title. Each year is a clean slate and I’m having as much fun as always.”

Laura Evever (AUS), 20, current ASP Women’s World No. 5 and Northern Beaches local will be looking to post a good result in her hometown event.

“It’s my second year on the ASP Women’s World Tour,” Enever said. “I’m training harder and putting more into it. I’m still myself and having fun, but I’m focusing more on improving my surfing. It feels good to be at home. I think it’s an advantage having my friends and family by my side and backing me.”

Nikki Van Dijk (USA), 17, has been awarded the event wildcard for the second year in a row. Van Dijk finished equal 5th at last year’s Commonwealth Bank Beachley Classic after an impressive run to the Quarterfinals.

“I want to do as well, if not better than I did last year,” Van Dijk said. “It’s great to be here with these girls because they’re the best in the world. I’m only 17-years-old so this is the best experience I can get. Hopefully we will some good waves and Dee Why. ”

The event will be webcasted live via www.beachleyclassic.com