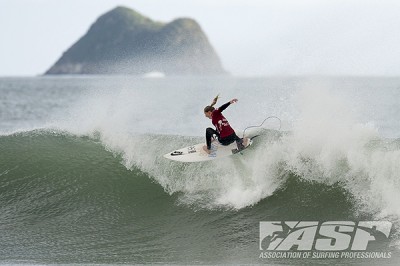 The TSB Bank NZ Surf Festival featuring the Dow AgroSciences Pro ran in excellent surf at Taranaki today. With four-to-five foot (2 meter) surf groomed by clean off-shore winds, the competitors were thrilled with the quality of surf on offer for a full day of competition.

Stop No. 3 of 7 on the 2012 ASP Women’s World Championship Tour, the Dow AgroSciences Pro is pivotal in the chase for the prestigious ASP Women’s World Title. In making the most of the epic conditions on offer, contest organisers ran through Rounds 2, 3 and half of Round 4, with competitors revelling in what was described at the best surf this event has seen in its three year history.

Stephanie Gilmore (AUS), 24, four-time ASP Women’s World Champion and current ASP Women’s World No. 1, today clocked the highest two-wave heat total of the event thus far, a massive 18.60 (out of a possible 20). Gilmore only caught four waves in her Round 3 heat, but she managed to pick the best ones and proceeded to tear them apart with her trademark powerful yet casual approach.

“It was really fun out there!” Gilmore said. “I was just so excited to go surfing. That’s when you have the most fun in heats and when you get the best scores, when you’re excited to surf. There was lefts, rights and every waves out there is really high quality. With a high score like that it should have been an easy heat, but Malia (Manuel) and Paige (Hareb) were ripping, they were throwing 8s and 7s back at me. This would probably have to be the best surf we’ve had at this event.”

Lakey Peterson (USA), 17, 2012 ASP Women’s World Championship Tour rookie, posted the highest single wave score of the event thus far in her Round 2 heat against New Zealander Sarah Mason (NZL), 16 – 9.85 out of a possible 10. Peterson timed her carves, snaps and fin throws to perfection to post the massive score and claim the heat win.

“That was just a really good wave and I think anybody would have gotten a 9.85 on that,” Peterson said. “It was a good right that lined up all the way to the beach and offered me plenty of opportunity. It was really fun. I had a blast out there, yesterday was onshore and a bit tricky, but today the wind is offshore and it’s really peaky and fun. It reminded me of Lower Trestles in California a lot.”

Paige Hareb (NZL), 21, the Taranaki local and hometown hero bounced back from a shock Round 1 loss yesterday and defeated Frenchwomen Pauline Ado (FRA) in the Round 2 encounter. Hareb only won by 0.40, but it was still enough to see her safely into the next Round.

“I wasn’t finishing my waves yesterday,” Hareb said. “So today I made sure I got a couple of good turns on the same wave. Then I started frothing a little bit and took off on a couple of bad waves, but I’m stoked to get through the heat. It’s cool to have everyone down here. It’s the only chance they get to see an ASP Women’s World Championship Tour event in person instead of seeing it live on the computer. It’s great to have all the top girls here and inspire all the little kids.”

Carissa Moore (HAW), 19, reigning ASP Women’s World Champion, was another of today’s top performers. Moore today advanced to the Quarterfinals after winning her Round 3 heat against Courtney Conlogue (USA), 19, and Rebecca Woods (AUS), 27.

“That’s a sudden-death round and you can end up with a 13th place,” Moore said. “So always a tough one to be in. I’m really stoked to be back in New Zealand. It’s always like a home away from home for me. It’s nice to see all my friends and my new family here. It’s nice to be back. I did really well and won the event my first time here two years ago, and I got second last year, so I’m hopping to do well this year again too.”

The TSB Bank NZ Surf Festival featuring the Dow AgroSciences Pro holds a waiting period from April 11 through 15 and will be webcast LIVE via http://nzsurffestival.co.nz.