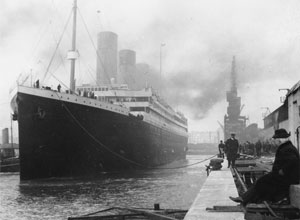 As the world solemnly marks the April 15th centennial of the sinking of the RMS Titanic, boaters and mariners alike can appreciate the vast improvements in maritime safety that were a result of the tragic sinking. In 1914, two years after Titanic’s loss of 1,503 lives, maritime nations gathered in London, adopted the International Convention of the Safety of Life at Sea (SOLAS Convention) and put in place a series of measures learned directly from the tragedy. Do any of those lessons learned relate to today’s recreational boater or angler? BoatUS set to find out.
Slow down: The commission that investigated the sinking found that excessive speed combined with the prevalence of ice flows was a major factor in the disaster. Do you slow down when boating at night, in foggy weather or when in unfamiliar waters? Any time you’re out on the water and something doesn’t “feel right,” slowing down is your best first move, giving you critical time to react.
Call for help: The radio that the Titanic used to send out the SOS had a limited range of only 200 miles and the airwaves were “crackling,” leading rescuers to misinterpret her position. Also, sadly, the vessel closest to her, the Californian, had shut down her radio for the night. Today’s US Coast Guard Rescue 21 system now covers over 40,000 miles of US coastline and some major rivers, taking the “search” out of search and rescue 24/7 by providing accurate location information with the simple push of one button – but only if your boat has a DSC VHF radio and it is properly connected to your GPS/chartplotter. Unfortunately, today the USCG reports that most DSC VHF radios are not connected to a GPS/chartplotter. If you travel offshore or boat alone, an EPIRB or personal locator beacon can also speed your rescue. On larger bodies of water a cell phone should only be considered a back-up emergency communications device, and always have your VHF on and tuned to channel 16.
Give a safety briefing to guests before you leave the dock: Regrettably, no lifeboat drills were held aboard the Titanic, the crew lacked training in their operation, and there was no public address system. Today, before they head out, recreational boaters and anglers can simply share with guests the location of the safety equipment and how to use gear such as the VHF radio, distress flares, fire extinguisher, or inflatable life jackets.
Have a life jacket for everyone aboard – that fits. The Titanic did not have enough critical safety gear, such as lifeboats, for all her passengers. Do you have enough correctly-sized life jackets for everyone aboard and are they readily accessible? A child in an adult size life jacket could easily slip out simply by raising their hands above their head.