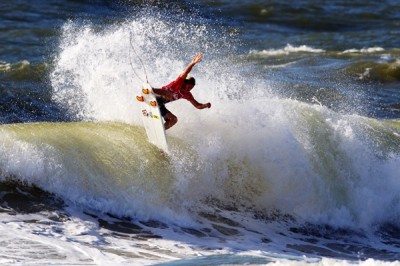 A second day of onshore, choppy conditions made it difficult for all surfers on day two of the Quiksilver Pro Junior 2012. North easterly winds continued to blow causing surfers to struggle in the unpredictable four foot surf at Durban’s New Pier.

Despite a testing ocean, top seeds Beyrick de Vries (Umhlanga), David van Zyl (Durban) and Michael February (Cape Town) all managed to put in excellent performances and post high scores to advance to the next round of the competition. De Vries who emerged victorious in the same event in 2011 stamped his authority early on in his round of sixteen heat by scoring an eight-point ride by getting fully covered up in the barrel and ending the ride off with a massive floater maneuver. “The conditions are a bit tricky but I am feeling confident in these waves, the onshore winds allow me to go to the air which is a necessity these days to win events,” said an excited de Vries.

The event gets going again at 8:00am on Sunday morning with the King of the Groms under sixteen division surfers. The finals for all four divisions start from 12h30 with the awards ceremony at 15h00. A great day of weather is expected to end off the Easter event and the final day shows signs of light variable winds which means better conditions for the surfers still in contention.

The Quiksilver Pro Junior & King of the Groms is presented by the City of Durban and supporting sponsors include Independent On Saturday, Skullcandy and Nestle Pure Life Water. The event is sanctioned by the Association of Surfing Professionals and Surfing South Africa, surfers will be powered by Red Bull.

For more information go to: www.quikprojunior.co.za.