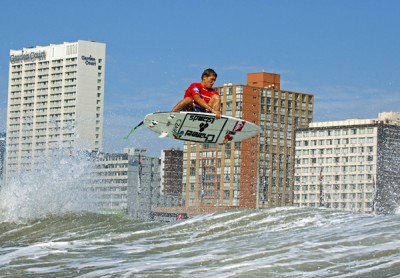 Slade Prestwich (Durban) was crowned the Quiksilver Pro Junior champion today at New Pier, Durban. The seventeen year old, formerly from Scottburgh, defeated the event favourite and last year’s champion Beyrick de Vries (Umhlanga) in a 20 minute final. Prestwich and de Vries were early standouts in the event posting some of the highest scores in the testing 4 ft (1.5-metre) surf.

Prestwich got off to a strong start in the under twenty division final well with a solid ride, scoring 8.25 out of a possible 10 points. De Vries battled to get going and had to make his way to the beach to swap boards after a shaky start. Ultimately time was on Prestwich’s side after sealing the heat and leaving de Vries needing a near perfect 9 point ride.

“I am so happy to win the event, I have been training every day and it has paid off, the surf was difficult but I stuck to my game plan and it paid off,” said a very pleased Prestwich after collecting his R15 000 winners cheque.

Michael February and Jacob Mellish, both from Cape Town took home R2 500 each and a set of Skullcandy headphones for winning the two Expression Session prizes. Mellish “blew up” on a perfect wave at New Pier to win the “Best Wave” award while February took to the air to win the “Best Aerial Maneuver” in the 20 minute session.

The Quiksilver Pro Junior & King of the Groms was presented by the City of Durban and supporting sponsors included Independent On Saturday, Skullcandy and Nestle Pure Life Water. The event was sanctioned by the Association of Surfing Professionals and Surfing South Africa; surfers were kept powered by Red Bull.

For more information go to: www.quikprojunior.co.za.