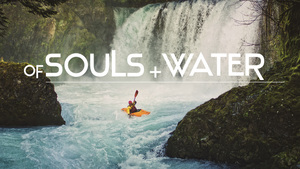 NRS and Forge Motion Pictures announce the launch of a new short film series entitled, Of Souls + Water. Filmed in exquisite high definition, five episodes tell the real stories of five character archetypes, all bound together by the common theme of water. A teaser will introduce the series on Sunday, April 8, at www.nrsfilms.com. The first episode will follow on April 29. All pieces will be publicly available on the Web.

“We didn’t want to just make another paddling movie,” says NRS Marketing Coordinator Mark Deming. “We wanted to capture the human connection with water, nature and adventure in a way that’s never been done. This series will resonate with anyone interested in the outdoors.”

With a reputation for creating powerful and beautiful outdoor adventure films, Forge earned the genre’s most coveted award in 2011 with the climbing film Cold, which won Grand Prize at the Banff Mountain Film Festival. In 2010, the Colorado-based production company set a new standard for kayaking films with Wild Water, winning prizes at festivals around the world. To create Of Souls + Water, director Skip Armstrong, an avid kayaker and former river guide, scoured the paddling, rafting and surfing communities to find dynamic film subjects with compelling stories. Filming in locations ranging from the Sea of Cortez to the majestic waterfalls of the Pacific Northwest, Armstrong and crew have employed the latest production technology to capture the scenery, action and emotion of each narrative.

Episode I, “The Nomad,” tells the story of extreme kayaker and global adventurer Erik Boomer. Four more episodes will follow throughout spring and summer: The Mother, The Warrior, The Shapeshifter and The Elder. Finally, a “making of” episode will share how the films were made. The series receives additional support from New Belgian Brewery.