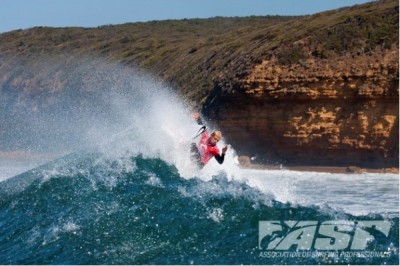 The Rip Curl Pro Bells Beach presented by Ford Ranger, the second stop on the 2012 ASP World Championship Tour, enjoyed another full day of action with the world’s best surfers lighting up the clean four-to-six foot (1.5 – 2 metre) waves on offer at Bells Beach.

Joel Parkinson (AUS), 30, defending Rip Curl Pro Bells Beach winner, proved the most dominant surfer of the day, posting the day’s high 18.94 out of a possible 20 for an electric performance in the Bells Bowl. Parkinson’s unmatched speed, power and wave affinity proved enough to eliminate an on-fire Fredrick Patacchia (HAW), 30.

“I had a blast,” Parkinson said. “I wish that heat went for an hour. Freddy (Patacchia) was saying it was the best Bells he’s ever surfed in a heat. I’ve had it a lot better, but it was solid and pumping and I had so much fun.”

Regarded as one of the best surfers to ever take on Bells Beach, Parkinson was awarded the prestigious Rip Curl Pro Gold Pass today, joining a short but illustrious field of stalwart Bells surfers as the youngest recipient ever.

“It’s an honor,” Parkinson said. “When you look at the list of people who have received this award, you see it’s one of those rare things in surfing. It’s a huge achievement. You just have to love Bells. It can be a real hard wave to surf and a real tricky wave. No matter how good you are out there, you can get stuck. You just have to pick a good line and timing is absolutely essential.”

With projections indicating a potential finish in classic and solid conditions tomorrow, Parkinson’s afternoon Round 4 win will serve him well as he advances directly to the Quarterfinals.

“Bells is a very taxing wave to surf,” Parkinson said. “There are huge faces and powerful sections and that flat spot in the middle that you have to contend with. Skipping Round 5 is definitely an advantage and there are rumors that we may be finish tomorrow. It’s Bells though so we just have to wake up and see what we’re dealt.”

Kelly Slater (USA), 40, reigning 11-time ASP World Champion and four-time Rip Curl Pro Bells Beach winner, posted an incredible Round 3 win this morning over local wildcard Nic Muscroft (AUS), 29. After suffering a broken board mid-heat, Slater required an excellent score with the clock winding down. Stroking into a wave with seconds left, the iconic Floridian wrenched a number of solid outside turns before punctuating with a massive air reverse on the final section.

“Just to finish that wave I was happy,” Slater said. “I thought, if Nic (Muscroft) won then great. We’ve had great heats over the years. That was one that was a full battle back and forth mentally. Nic got cleaned up by 20 waves and the sets stopped when he got out and then he broke his board and I didn’t capitalize on those sets. I hadn’t finished a good one midway through the heat and then he came back really well. I never had any great waves overall. Luckily I got one with about 8 seconds left. I had the carve to start and it went a little dead until the end. The lip launched me perfectly in the air and had a good cushion to land on. I thought it’d be close either way. I would have been stoked for him, he’s such a good guy and obviously everyone’s pulling for him.”

Michael Peterson (AUS), winner of the first three events at Bells Beach and an icon of Australian surfing, tragically passed away last week and Rip Curl have dedicated this year’s event to his memory. The added importance of this year’s Rip Curl Pro Bells Beach is not lost on Slater.

“It’s been one week since Michael (Peterson) passed away,” Slater said. “Since the event is dedicated to him, we all have the black bands on, and it’s going to mean a lot to whoever wins this contest. I’ve got four Bells titles, but it’s taken me 20 years to do that. I’ve had a good run, but Joel (Parkinson) is often the guy to beat out here. Nic’s like that too. He picks the right waves and surfs them well.”

Slater would go onto crush his Round 4 heat with an 18.50 heat total this afternoon, advancing directly to the Quarterfinals.

Not to be outdone by Parkinson and Slater, Mick Fanning (AUS), 30, two-time ASP World Champion and former Rip Curl Pro Bells Beach winner (2001), was in sizzling form throughout both his Round 3 and 4 heats, posting an 18.46 and an 18.20, firmly cementing himself as the form surfer of the day.

“It’s always great to surf Bells with no one out,” Fanning said. “I’m just stoked because after a few waves, I was wondering, ‘do we play tactics or just catching waves.’ We just traded off waves and Raoni surfed good. With someone like him, who can posts 9s, it’s still a little nerve wracking and I’m happy to make it through that round. It’s a crucial one to get through.”

A perennial threat for the ASP World Title himself, Fanning was guarded when commenting on today’s Round 3 ousting of current ASP frontrunner Taj Burrow (AUS), 33, at the hands of Kai Otton (AUS), 32.

“It’s only been one event and there’s a long way to go,” Fanning said. “Kelly (Slater) missed a whole event last year and won the title with one event to go. I’m not super focused on that part right now. I’m focused on having fun. I’m just stoked. Bells is just one of those places. I love to come down to bells and having my main sponsors here, they’re so supportive and it’s just a great place. I’ve been coming here since ’97 and it’s always a great time.”

Following the completion of the men’s Round 3 and 4, the Rip Curl Women’s Pro Bells Beach presented by Ford Fiesta saw the girls smash up the solid waves on offer at the Bells Bowl for the non-elimination Round 3.

Malia Manuel (HAW), 18, 2012 ASP Women’s World Championship Tour rookie, was explosive in this afternoon’s Round 3 bout, besting current ASP Women’s World No. 1 Stephanie Gilmore (AUS), 24, with the round high 18.30 out of a possible 20 and advance directly to the Quarterfinals.

“I think it was mostly the waves we had that helped me through the heat,” Manuel said. “The heat before had a lot of waves so I thought ours wouldn’t have many but it just kept pumping. I had to throw everything I had into it and it feels great to come away with the win. It’s always nice to surf against Steph (Gilmore). She’s one of my heroes. It’s always a pleasure to surf against her here.”

Carissa Moore (HAW), 19, reigning ASP Women’s World Champion and last year’s event runner-up, was another solid performer this afternoon, racking up an excellent 17.94 out of a possible 20 en route to the Quarterfinals.

“I would love a big bell,” Moore said. “I think we’re all really excited that the waves are so good this year and it doesn’t look like it’s going to slow down. So hopefully we continue to score great conditions and have a good finish.”

Event organizers will reconvene tomorrow morning at 7am to assess conditions for a potential 7:30am start.

The Rip Curl Pro Bells Beach will be webcast LIVE via http://live.ripcurl.com