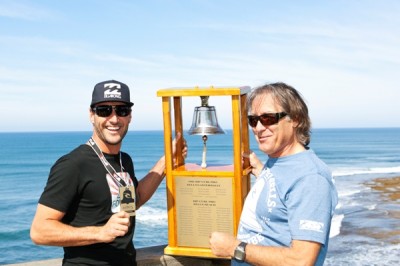 The Rip Curl Pro Gold Pass ensures that the event’s greatest champions and supporters remain actively involved with the ASP’s longest-running surf contest. It grants the holder access to all areas of the Rip Curl Pro event site for perpetuity.

“The Gold Pass was designed to ensure that past champions and great contributors to the event remain a part of the Rip Curl Pro forever,” said Rip Curl Marketing Chairman Neil Ridgway.

The idea for the Pass came about years ago when Ridgway ran into former Rip Curl Pro champion Simon Anderson in the Winkipop parking lot during the event. When Ridgway invited Anderson to join him for a beer in the grandstands, the surfing great told him that he would love to, but that he didn’t have a pass to enter the event site.

“If Simon Anderson couldn’t get into the Rip Curl Pro, then something was very wrong,” Ridgway said.

The Gold Pass is normally awarded to surfers who have already retired from competition, but Rip Curl decided to make an exception in the case of Parkinson, a 5-time finalist and 3-time winner of the Rip Curl Pro Bells Beach.

“Parko is one of the smoothest surfers ever to hit the Bowl for the Rip Curl Pro,” Ridgway said. “When he is on, he’s a wave magnet. He calls them up. We’re stoked to see him in the Gold Pass club.”

Parkinson was awarded his Gold Pass at a presentation ceremony held at the Rip Curl Pro presented by Ford event site at Bells Beach on Thursday.

“It’s an honor,” Parkinson said. “When you look at the list of people who have received this award, you see it’s one of those rare things in surfing. It’s a huge achievement.”