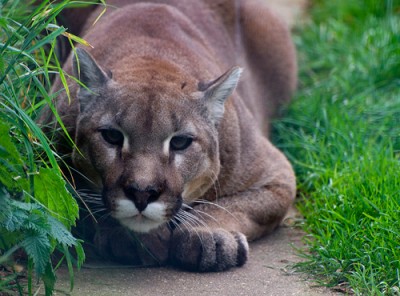 The unbelievable story Robert Biggs told of a mother bear rescuing him from a mountain lion attack over the weekend left some readers skeptical. More importantly, the California Department of Fish and Game had their reservations and they investigated Biggs’s story.

This week, test results for blood found on his backpack showed that the blood is human. Other tests show there was no sign of an animal attack.

Biggs claimed that a mountain lion pounced on his backpack as he turned to leave after wildlife watching a mother bear with her yearlings on a hike in northern California. He claimed to have hit the large feline with his walking stick and did anything he could to not get devoured. Seemingly seconds later, the mother bear came to the rescue and ripped the lion off his back and scared it away. With a humbling look toward Biggs, she walked back to her young.

California officials became skeptical when they noticed that Biggs came back from the attack with little more than a cat scratch. The Department Communications Manager Kirsten Macintyre said that mountain lions don’t scratch in an interview with the Huffington Post. “There’s a very distinct pattern of injuries when a mountain lion attacks a person or a deer. They don’t just run away — even if a bear comes along,” Macintyre said.

Macintyre also said in an email to the Paradise Post that there was no indication of lion or bear blood, hair, or saliva present on Biggs’ hiking backpack. Biggs says there was none found because he left his backpack out in the rain after the incident before it could be tested for DNA.

Officials say the evidence they did find – including small wounds on Biggs and a tear in his pack, is inconsistent with a mountain lion attack. But Biggs still sticks by his story, saying he doesn’t care what others say.