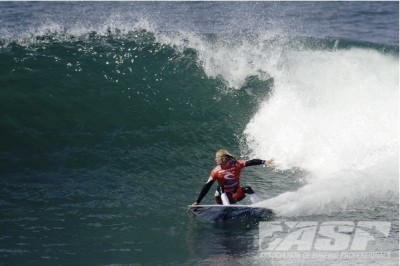 The second stop on the 2012 ASP World Championship Tour, the Rip Curl Pro Bells Beach culminates the crucial, season-opening Australian leg for the world’s best surfers and today saw the top seeds dominate the opening round affairs in variable conditions.

“It’s really turning on out there,” Wright said. “After watching that first heat and noticing it was slow I figured we would be on in terms of waves. Bells is always slow heat, fast heat, slow heat, fast heat. It was good to get into a rhythm and wrack up a few solid scores.”

“I’m feeling in form and I’ve actually been drawing a lot of inspiration from Occy (Mark Occhilupo) at Margaret River last week,” Wright said. “He’s 45 and he’s still pushing the limits of surfing and it was really exciting to see him do so well. With this event, I put a bit more volume in the boards after noticing Occy had a bit more in his boards out West. I’ve got some new fins and it’s just a great combination I have going at the moment. Feels like the boards have really been carrying me through those soft sections out there and putting me where I want to be on the waves.”

Joel Parkinson (AUS), 30, 2011 ASP World Runner-Up and defending Rip Curl Pro Bells Beach winner, continued to show the world why he is regarded as one of the finest surfers ever to step foot in the Bells Bowl, coming back from an inconsistent heat to post an excellent 9.27 out of a possible 10 and advance directly to Round 3.

“Bells can definitely go quiet like that,” Parkinson said. “There are some really good waves out there today, but it can be pretty slow. It can be a good heat or a bad heat. You just don’t know. That 9.27 was a dream little Bells Bowl waves. It just lined up for me and I was able to let my surfing do what it needed to do.”

Jordy Smith (ZAF), 24, heir apparent to the Bells Bowl stylemaster mantel and current ASP World No. 3, survived a wave-starved opening round heat, claiming victory with some excellent surfing in the dying moments of the heat.

“It was rough out there,” Smith said. “Kieren (Perrow) and Freddy (Patacchia) started up the point at Rincon and I started in the Bowl which didn’t work out for me. It really boiled down to the last few minutes with one set and I had to make the most of it. Happy to be back at Bells and the swell looks good for the week so hopefully we get some more consistent conditions.”

Smith’s increased fitness level over past seasons has been noted by the media as well as his fellow competitors as a key contributor to his newfound consistency this year, and the South African is looking poised for another solid run at the ASP World Title.

“I’m feeling really good this season,” Smith said. “I’m training a bit, but mostly eating right. I’m not having burgers and pizza every day…I guess I have it occasionally, but better diet has been the best thing for me. My board feels really good and I think I’m in a good position to pick up another result at Bells.”

Kelly Slater (USA), 40, reigning 11-time ASP World Champion, survived a slow affair later in the afternoon, collecting the heat-winning ride (the highest single-wave score of the day – a 9.50 out of a possible 10) in the dying moments of the heat.

“It was interesting out there as I really did all the work in the last four minutes,” Slater said. “I felt like I was out of rhythm the whole heat, but really there just weren’t waves with a lot of scoring potential. Bells has that characteristic though and the door was left open just enough for me to get one in at the end.”

Adriano de Souza (BRA), 25, current ASP World No. 2, is coming off an impressive Final’s berth at the season-opening event on the Gold Coast, and the young Brazilian showed exceptional poise in Round 1 today.

“I’m really happy with myself to do well on the Gold Coast and then come here with a win in the first round,” De Souza said. “I’ve gotten a lot of waves here the past week. I came here early to get my equipment ready and get used to the conditions and I think it’s really helped.”

Long heralded as Brazil’s finest candidate for a maiden ASP World Title clinching, De Souza is taking a measured approach to the season ahead and retains his focus for the job at hand.

“I don’t really feel the pressure of trying to be the first Brazilian world champ,” De Souza said. “I just do my thing. We’ll see at the end of the year whether I’m in the race or not. I’m focused on Bells now and focused on the next heat. I’m happy with my performance so far.”

Nic Muscroft (AUS), 29, trials’ winner and wildcard into the Rip Curl Pro Bells Beach, caused the day’s biggest upset in besting current ASP World No. 1 Taj Burrow (AUS), 33, and rookie phenom Kolohe Andino (USA), 18, to advance directly to Round 3 of competition. The local Victorian trailed for the bulk of the heat until the dying moments where he tore apart a set righthander to take out the heat win.

“My legs are a bit sore after that last wave,” Muscroft said. “I didn’t know if I would have much of a chance against those guys out there, but I was able to get a good wave at the end and got the score. It’s always a pleasure to compete at this level and my best friend Robbo (Adam Robertson) made it to the Finals here a few years ago and that’s given me the confidence to do well here too.”

Conditions deteriorated this afternoon to the point where event organizers called the men’s Round 1 off after Heat 9, opting to resume in better conditions possibly tomorrow.

Running in conjunction with the men’s event, Round 1 of the Rip Curl Women’s Pro Bells Beach presented by Ford Fiesta was completed this morning in clean three-to-four foot (1 metre) waves at Bells Beach.

“Very happy with that heat as everything went my way,” Fitzgibbons said. “I was able to pick off two really good waves that linked all the way through the Bowl. Coco (Ho) was ripping and probably would have won a lot of heats today. My equipment feels good and I’m just excited to be back in Bells.”

“The waves are really fun out there and it was great to get the first heat out of the way,” Moore said. “I’m very happy to be back at Bells and out in some fun waves. I didn’t get the result I wanted on the Gold Coast so I’m hoping to post a better one here.”

Laura Enever (AUS), 20, current ASP Women’s World No. 2, was in sensational form this morning, posting a solid win in the opening heat of the event.

“I didn’t set the bar too high last year at this event so I suppose it was easy to best that result,” Enever said. “It’s a new year though and my goals have changed. I started the season out with a Runner-Up finish on the Gold Coast and I’m focusing on putting in a really solid year. It’s great to be back at Bells. It’s a lot warmer than it usually is, but we have fantastic waves and it’s very beautiful down here.”

Lakey Peterson (USA), 17, caused a major upset in besting four-time ASP Women’s World Champion Stephanie Gilmore (AUS), 24, in a countback Round 1 affair. Peterson advances directly to Round 3 while Gilmore has been relegated to battle it out in the elimination Round 2.

“The conditions were pretty tricky out there for us with not a lot of waves coming through in that heat,” Peterson said. “Steph (Gilmore) is such a force out there and to advance ahead of her at a spot like Bells is great for confidence.”

Coastalwatch Plus, official forecasters for the Rip Curl Pro Bells Beach, are calling for a succession of strong WSW groundswells emanating from this activity are inbound across the region –peaking early on Wednesday, followed by a second building in later Thursday and holding good size early Friday.

Event organizers will reconvene tomorrow morning at 7am to assess conditions for a possible 7:30am start.

Highlights from today’s Rip Curl Pro Bells Beach will be available via http://live.ripcurl.com