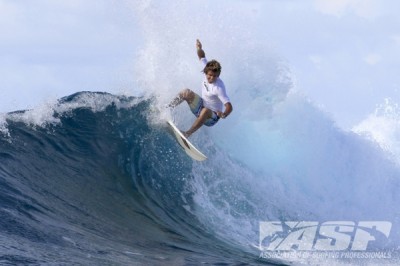 The opening day of the ASP Australasia 5-Star rated Rangiroa Pro Junior began with excellent 3 foot (1.5 meter) waves reeling down the reef. Rangiroa is a tiny tropical isle an hour flight north of the Tahitian capital and is home to a world-class right-handed reef break. The ASP 5-Star rating for this event offers vital points for surfers seeking qualification for the ASP World Junior Tour and the surfers out of the qualification race are battling to improve their seeding for next year.

Tamaroa McComb (PYF) easily advanced out of his Round of 32 heat today after posting a massive 17.00 (out of a possible 20) two-wave heat total. McComb was a late entry into this event, and is a threat to take the title after using his local knowledge and hometown crowd support to post a dominant performance.

“That was a really good heat for me,” McComb said. “I was really lucky to get some good waves, some perfect waves. There’s no pressure for me here, I’m just happy to be back in competition. The waves here are so good, I love surfing here.”

Alex Dive (NZL) clocked the highest single wave of the day – 9.50 (out of a possible 10), courtesy of a classic Rangiroa tube ride. Dive was already in first when he found himself in the perfect position for the tube on a day where they were hard to come by.

“That wave came out of the blue,” Dive said. “I just managed to scratch into it and I though it was going to close out, but I pulled into it anyway. I just kept travelling and then popped out the end and I knew it would be a big score. It’s real big for me to score a 9.50, because this is probably the last ASP Pro Junior event of my career. I’m really stoked.”

Tim Macdonald (AUS) was in tune with the ocean for his Round of 32 heat this afternoon. The North Stradbroke Island surfer positioned himself on all the best waves of the heat and used his smooth style to impress the judges and advance to the Round of 16.

“My heat was really fun,” Macdonald said. “There wasn’t too many barrels coming through, but still some really nice waves. Rangiroa is amazing! This week I’ve had some of the best waves of my life. It’s been a really chilled vibe in the water, and the waves have been great. Everyone is having a really good time.”

Cooper Chapman (AUS), current ASP Australasian Pro Junior Series ratings leader continues to be the one to beat after advancing to the Round of 16 today. The race for the number 1 spot was very tight between the top five surfers coming into this event, but the lead has spread after Oney Anwar (IND) had to withdraw from the event and Jordin Watson (AUS) lost his Round of 32 heat today.

“I’ve been thinking about the ratings a bit,” Chapman said. “What happens at this event could define my career. Winning the Australasian Pro Junior series is a big deal, and I’d love to do it. Today I surfed a different board to the one I’ve been riding all week. The surf is a bit smaller and it was good to get out there and get a couple of turns off. This week has been great, I scored a couple of great days at Teahupoo before I came to Rangiroa. Then I got straight off a plane into another good swell here. I’ve been getting barrelled all week, it’s been amazing.”