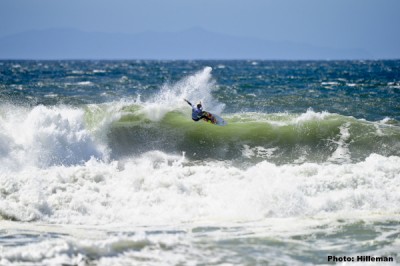 Young found two lefthanders during the final, opening his campaign with a 7.60 for several committed turns and a floater-to-barrel combination on his backup ride for a 7.47 to solidify the Vans Pier Classic win over Nathan Yeomans (San Clemente, CA), 30, Chris Ward (San Clemente, CA), 33, and Chase Wilson (Newport Beach, CA), 21.

The standout goofy-footer is hoping to carry the confidence from his hard-earned victory today to the upcoming ASP PRIME event at Lower Trestles next month to aid in his campaign towards qualification for the ASP World Championship Tour.

“It feels good to just get a win,” Young said. “I haven’t had one in awhile. To get a win at the start of this year is great and I’m looking forward to the rest of the season.”

Nathan Yeomans put on an amazing show of his own in the final, launching big frontside air for a 9.17, to take the highest single wave score of the heat. In the dying minutes of the Final, Yeomans took off on a lefthander in need of a 5.90 for the win and fell just short of the victory, earning a 5.70 for the ride.

“I’m stoked with this result, you always want to win, but it was a busy final,” Yeomans said. “It was a lot of work and I was really tired. I caught a lot of not-so-good waves and you can’t hear scores, I had no idea what was going on. Had I known I needed a 6 I would have probably waited for a better wave, but I’m stoked for Nat (Young).

Chase Wilson had a breakthrough performance at this year’s Vans Pier Classic, consistently stringing together impressive results to make his first career men’s ASP final with a 4th place finish.

“I’m so pumped right now to even be in the final,” Wilson said. “I can’t believe it. It’s definitely very chaotic out there. It’s challenging and the paddle out is intense. You’ve got to just set up out there and try and pick your waves.”

Keanu Asing’s tactics of careful wave selection proved to be vital in the Vans Pro Junior Final. The Oahu native opened his campaign with a 7-point ride and maintained the lead throughout the heat’s entirety despite a late-heat charge from Andrew Doheny (Newport Beach, CA), 19, who finished in second.

“I can’t even explain how I feel,” Asing said. “I feel like I’ve worked really hard and this stuff is right up my alley. I’m really exhausted and lost for words right now with this win. To start off with a solid score like that is huge, it’s a lot of weight off of your shoulders. Instead of playing catch up, you’re looking to replace scores and it allowed me to select better waves. To get a good lead like that was real crucial.”

Asing, a standout on the ASP Pro Junior Series, is now in excellent position to qualify for the ASP World Junior Tour compliments of the Vans Pro Junior’s ASP 4-Star status.

“It’s a big weight off of my back to get this one out of the way and get a win with this being a 4-Star,” Asing said. “Winning a junior with this many points is huge for my rating and crucial for the ASP World Juniors.”

Conner Coffin (Santa Barbara, CA), 18, was the ironman of both the Vans Pier Classic and Vans Pro Junior events, advancing to the Semifinals of men’s competition while taking fourth overall in the Pro Junior division. Coffin was on a rampage throughout the morning, belting the event’s second 10-point ride with three backhand power-turns, but the bombing victory-at-sea conditions got the best of the young regular-footer in the final rounds.

“Usually I dig doing double-duty and it was still real fun today,” Coffin said. “This morning was still kind of somewhat manageable, but this afternoon got tough. I’m so tired, my arms hurt so bad, but I’m stoked and I had a lot of fun surfing. It’s always fun to get good waves whether you win or not and I’m happy with the way that I surfed.”

For highlights of the 2012 Vans Pier Classic and Vans Pro Junior presented by Jack’s Surfboards and hydrated by vitaminwater log on to www.vans.com/pierclassic