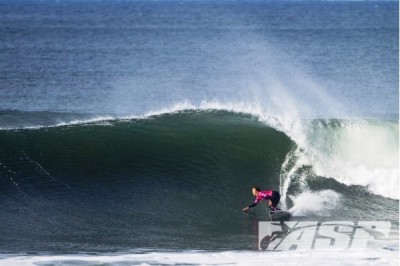 The Rip Curl Women’s Pro Bells Beach presented by Ford Fiesta, Stop No. 2 on the 2012 ASP Women’s World Championship Tour, is less than a week from commencing and the world’s best female surfers are eyeing a potentially epic swell set to arrive at the iconic Bells Beach early in the waiting period.

“Last year’s Bells event was such an incredible moment in my career,” Fitzgibbons said. “The feeling to take out my very first World Tour event was incredible. I’m looking forward to going back down and chasing that feeling at this year’s event. Bells Beach is such an iconic event, it is one that every surfer wants to win and ring that Bell. It’s going to be so exciting, I can barely wait!”

Although suffering a wrist injury early in the year, Fitzgibbons rallied to claim the Australian Open of Surfing at Manly and the Hunter Ports Women’s Classic at Newcastle (both ASP 6-Star events) as well as placing Equal 3rd at opening stop of the ASP Women’s World Championship Tour season on the Gold Coast.

“It has been a really great past few events for me,” Fitzgibbons said. “I’ve put in a lot of hard work, especially when I was out over the summer with an injured wrist. I know how important it is to be consistent if you want to remain in the top few on tour. I’m having so much fun with my surfing, trying new things and wanting to perform bigger and better.”

While Fitzgibbons is one of the threats for this year’s ASP Women’s World Title, the collective talent of the ASP Top 17, including a dangerous rookie class, will serve as a major hurdle for any surfer that challenges for the crown.

“I think all that emerging talent that everybody has been talking about the past few years has definitely arrived,” Fitzgibbons said. “It’s tougher than ever this year and all the young new rookies are hungry to win. It makes for some super exciting match-ups and plenty of room for upsets in the draw. I’m loving the challenge and I’m going to throw everything at it.”

Carissa Moore (HAW), 19, reigning ASP Women’s World Champion, has continued her dominant form from last season at the opening stop of the year on the Gold Coast of Australia. However, Moore would fall uncharacteristically early to young Australian ripper Tyler Wright (AUS), 18, in the Quarterfinals of the initial event, kicking off her inaugural title defense slower than she would prefer.

“I was pretty frustrated with my result at the first event,” Moore said. “A fifth place isn’t horrible but it isn’t fantastic either. I think it is a good starting point that I can hopefully build on throughout the season and the cool part is I get to be the underdog going into Bells.”

Working herself through an ASP Title defense for the first time, Moore admits there is a definitive change in her approach opposed to last year and the continued evolution of women’s surfing is keeping competition challenging.

“It’s definitely a little bit of a different vibe this year,” Moore said. “Instead of chasing, I am being chased and that’s a whole different kind of game. You really can’t discount anyone at any event. All the girls are surfing super strong and are all really fired up and excited to perform. Bells Beach has so many different faces but I am really excited about the challenge and figuring it out.”

Coastalwatch Plus, official forecasters for the Rip Curl Pro Bells Beach, are calling for the start of the Rip Curl Pro at Bells Beach, including the trials to be held on the Sunday 1st and Monday 2nd of April, is now looking nothing short of excellent. The forecast broadly hinges on an active storm track affecting the far southern Indian Ocean through to Western Australian longitudes over the next week to ten days.

The Rip Curl Women’s Pro Bells Beach presented by Ford Fiesta will run from April 3 – 9, 2012 and will be webcast LIVE via live.ripcurl.com