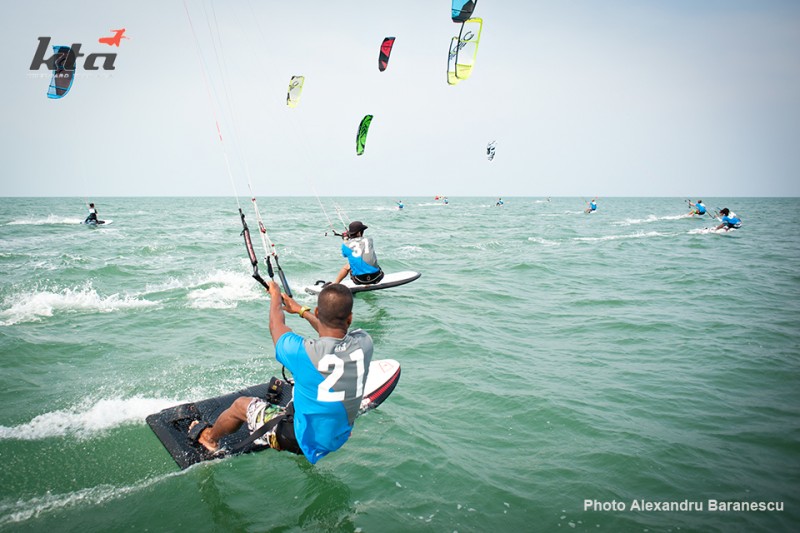 In the week before the Kiteboarding Olympic Trials in Santander Spain, the KTA held Asia’s top championship events for the sport in Pranburi Thailand.  The 69 riders from 24 Nationalities competed over a five day period at the beautiful seaside location of Pak Nam Pran Beach in Pranburi to crown this season’s Asian race and freestyle champions.

Neil Godbold, KTA Founding Director, said, “We were all very aware in the KTA team that a great number of people would be watching this event as the last major kiteboard championship before the Olympic trials, so we were relieved when earlier forecasts turned out to be wide of the mark and instead of the low to no winds we were expecting we in fact ended up with classic conditions which gave us top quality competitions for both the freestyle and course race competitors.”

The wind throughout the KTA Thailand was fairly consistent with each day starting to build in the late morning allowing the RB (race board class) to kick off proceedings before noon. Then as the wind filled in with the daily thermal the event would switch to TT (twin-tip) racing and then finally over to the freestylers.

Only the first and last days would break this pattern with day one being the extra day added at this event for the Asian Course Race Championships and the last only producing between of 12-14kts in the afternoon due to an overnight storm.

It was enough wind however though to give the RB Class perhaps fittingly the final outing of the event (overall race tally of 20 races between the TT and RB) but unfortunately just not enough to finish the freestyle double elimination finals which had been left poised from the day before. The freestylers did complete a quality single elimination round to return the event results need to crown the new Asian Champions

The Thailand event attracted riders not only from across Asia but from as far afield as Europe and the US as the KTA tour continues to grow and gain respect and stature in the kiteboarding world.

The KTA which is now in its third season was introduced to provide a platform for Asian riders as well as being open to riders from other continents to take part. The Championship event in Thailand showed how this all comes together with both Open event titles (any nationality) and Asian crowns (Asia riders only) being fought over. It’s a model that seems to be working well as the Asian standards can be seen to be improving each season with most overall winners podiums now seeing Asian riders on them.