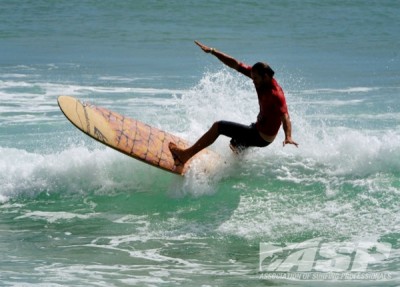 In a tricky 1-2ft (.5 metre) swell, Jensen reached the final after finishing second in his semi-final and will meet three Australians in the decider.

Ingleby (16.66) was the form surfer in the semi-finals taking early control of his heat with a 7.83 and 8.83 to beat Wilson (13.57), whose classic, fluent style has taken the Sunshine Coast surfer all the way to the final.

In the first semi-final, Jones, another Sunshine Coast surfer, locked in an early 8.17 but was forced to trade the lead several times with Jensen before taking the heat 15.17 to 14.84.

In a busy day of finals for Wilson, he will also appear in the SUP Pro final and Noserider final.

Williams and Smith have been going head-to-head throughout the event, with Smith again prevailing in their semi-final 15.33 to 10.14. Williams managed to find the only barrel of the day when she decided to take a rare left on the inside.

In the second semi-final, the super-stylish Dzigas scored an early 7.67 as the swell dropped to take the heat over Appleby 12.20 to 10.83.