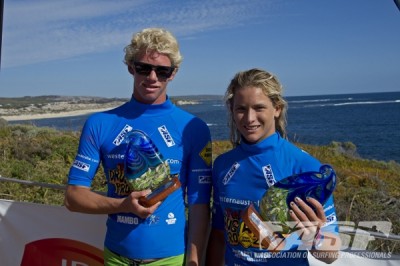 John John Florence (HAW) has taken out the ASP Prime rated Telstra Drug Aware Pro, with Courtney Conlogue (USA) winning the ASP 6-Star Women’s event. WA turned it on for the final day of the event with clean 3 – 4 foot (1.5 meter) surf, and perfect clear sunny skies for the surfers and thousands of spectators.

Florence’s performance at this event will go down as one of the most dominant in the event’s history. Florence has collected five of the top ten single wave scores and the top thee two-wave heat totals thanks to his full repertoire. Florence defeated fellow Hawaiian Olamana Eleogram (HAW) in the Final by scoring two 9-point-rides, for mixing huge power gouges with technical aerials.

“I’ve been having a lot of fun this week,” Florence said. “The waves are are a lot like at home, even the wind when it’s good for airs is a lot like Hawaii. The waves have been fun in all of my heats. I’m so stoked to win. This gives me a lot of confidence going into Bells because I hear the waves are similar. I was so stoked to make the Final with Ola (Eleogram), I’ve grown up surfing with him and to have him in the Final with me at Margaret River was great.”

Courtney Conlogue (USA), reigning Telstra Drug Aware Pro event champion, today won the event for the second year in a row. Conlogue’s powerful backhand attack is perfectly suited to these powerful South West WA waves. The young Californian dominated the Final against Hawaiian Malia Manuel (HAW), posting two scores in the 8-point-range (out of a possible 10), to etch her name on the winners list once again.

“I was trying not to think about going back-to-back too much because I didn’t want to put pressure on myself,” Conlogue said. “I’m stoked to have gotten two in a row. This place taught me a lot last year and the years before. The first time I came here I lost in the second round and it was quite an embarrassing heat. Going from that to what I’ve done now feels great, and each year I come back I feel like I get to know the waves better and better. Now I’m looking forward to going to Bells because this place is great training for down there.”

Mark Occhilupo (AUS), 1999 ASP World Champion, although retired from full-time competition decided to come to Margaret River and attempt to win the event for his third time. Occhilupo’s affinity for Margaret River was clear from day one, with surf fans being treated to watching his iconic style and flair as he progressed through the contest. His dream run ended in the last minute of his Semifinal today, when Olamana Eleogram (HAW) posted a 6.50 and took the lead, sending Occhilupo home with an equal 3rd place finish.

“I have had the best time this week,” Occhilupo said. “In that Semifinal I had a pretty bad heat. A wave came at the end that I could have gotten the score on, but I fell. I’m going to go away and keep thinking about that. I’m still beating myself up about it. By the time I get home it will have sunken in and I will be stoked with third. That competitive nature doesn’t ever leave you.”