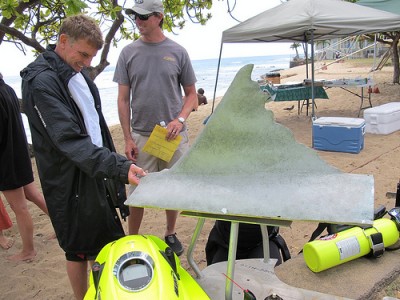 Mike Prickett, an internationally-acclaimed underwater cinematographer from Oahu, Hawaii is in the hospital in Tahiti after a diving accident involving another diver left him paralyzed from the chest down.

On Wednesday March 14th, 2012, Prickett, 47, tried to rescue another diver while on a commercial filming job in Tahiti. He told Ocean Promotion, “I was doing an underwater shoot for wetsuits and dive gear. I saw another diver sinking and panicking. I dove down to 220 feet to save him, but he used up all my air. I’m glad I was able to rescue him and he could walk away from the incident.”

In the process of saving the other diver, Prickett sustained a severe case of decompression sickness, which left him paralyzed from the chest down, but he regained partial sensation in his legs by March 20th. Decompression sickness is a term used to describe the illness that results from a reduction in the ambient pressure surrounding the body, according to the Divers Alert Network. In the process, bubbles form in body tissue and cause local damage. He is still undergoing hyperbaric oxygen therapy in Papeete on the island of Tahiti in French Polynesia.

Prickett was scheduled to appear on a Talk Story event at the North Shore’s Surfer The Bar at Turtle Bay Resort March 28th, but a benefit for his medical and other expenses will be held in its place.

Prickett has won numerous awards for his underwater cinematography including Emmys and Sundance Film Festival awards. He has filmed in almost every ocean and his work is included in Riding Giants, Step Into Liquid and Ultimate Wave Tahiti.

Below is an example of Prickett’s work. Highlights from Day 1 of the 2012 Da Hui Backdoor Shootout, produced by Prickett Films.

Prickett’s family put together a video asking people pray for him, view it here.