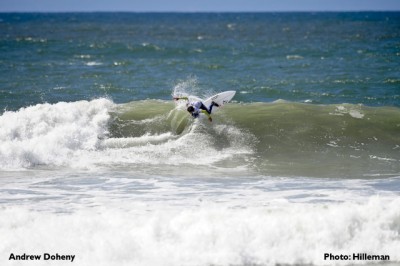 The ASP 4-Star Vans Pier Classic and Vans Pro Junior presented by Jack’s Surfboards and hydrated by Vitamin Water are set to return to historic Huntington Beach Pier and will see several of the nation’s finest surfers compete in what are expected to be excellent conditions from March 28 through April 1, 2012.

Andrew Doheny (Newport Beach, CA), 19, has been given a wildcard into the top seeded round of Vans Pier Classic competition and is looking to capitalize on the valuable points on offer to build his ASP World Ranking while competing close to his Orange County home.

“This is my last year doing the Pro Juniors so I’m starting to get my feet wet in the star events,” Doheny said. “I’m lucky to have Vans, my sponsor, give me a wildcard spot. Huntington can be a tricky spot and having a better seed helps me secure some points. My goal is to do well in this event. It’s near where I live and a win would be great and a good momentum builder for the rest of the year.”

Doheny, who finished 9th on the 2011 ASP World Junior Tour, is also looking for success in the men’s Vans Pro Junior to help him earn his right to compete against the international top juniors in his final year of eligibility in the division.

“The 4-Star Pro Junior event is really important for me to do well in,” Doheny said. “I’ve already missed a couple of events this year and there are only two 4-Stars and one 6-Star. To do well in this event will take some pressure away from me. I’m hoping to end my last year as a Pro Junior in a positive way.”

Conner Coffin (Santa Barbara, CA), 18, who enters the Vans Pier Classic fresh off of a win at the Pipeline Pro Junior, will carry the confidence gained from his achievement in Hawaii while looking for success in both the ASP Pro Junior and men’s 4-Star events.

“Winning the Pipe Pro Junior has definitely helped with my confidence,” Coffin said. “It had been a really long time since I’d won a major contest and I kept coming really close. To get that first Junior win under my belt feels really nice and I think it will take a lot of pressure off moving forward.”

Coffin, who is a standout on the ASP Pro Junior Series, knows a top performance at the Vans Pro Junior is vital for regional surfers’ qualification campaigns for the ASP World Junior Tour and the polished regular-footer is taking a relaxed approach to competition to aid in securing a keeper result.

“I really like surfing these events at Huntington because there are typically a lot of waves and the lineup is spread out,” Coffin said. “This year there are only a few big junior events in North America, so this one is real important to qualify for worlds. I’m just hoping to allow myself to relax in my heats and surf the way that I want to surf.”

Coffin is also hoping to scalp the crucial points on offer at the men’s ASP 4-Star rated main event to build his seed on the men’s ASP World Ranking.

“It’s always rad when you can double dip,” Coffin said. “I like surfing a lot of heats and I feel like I get in a good rhythm when I’m able to do that. It’s also really fun to surf against all of the older guys.”

Surfline, official forecasters for the Vans Pier Classic, are calling for a combination of swells to build throughout the week, with a peak expected for the final day of competition.

The Vans Pier Classic and Vans Pro Junior presented by Jack’s Surfboards and hydrated by Vitamin Water will run from March 28 through April 1, 2012 and is webcast LIVE via http://www.vans.com/pierclassic.