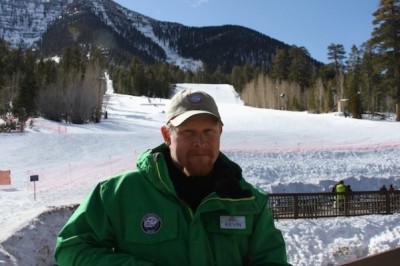 When you think of Las Vegas businesses and professionals, your first thought probably isn’t of mountain sports and the National Forest Service. But Kevin Stickelman, the president and general manager of the Las Vegas Ski & Snowboard Resort (LVSSR) is involved with both and he was chosen to be one of Vegas Inc. Magazine’s “40 under 40” for it.

He rejuvenated a $35 million development plan long-overdue for the National Forest Service and increased his ski and snowboard resort’s business threefold. He hired three times as many employees for both the winter- and off-season. Because that means more jobs and tourism dollars in the economy, Vegas Inc. felt he deserved the nomination.

Kevin Stickelman, president and general manager at the Las Vegas Ski & Snowboard Resort (LVSSR) is named one of Vegas Inc. Magazine’s “40 under 40” for 2012. Vegas Inc. is a weekly business-to-business publication geared towards professionals. Stickelman, who joined LVSSR in September 2010, was selected from hundreds of Las Vegas professionals nominated for the distinguished award.

During his tenure, Stickelman has been a key component in securing the passage of a $35 million Master Development Plan from the Humboldt-Toiyabe National Forest Service. An idea a decade in the making that had been stalled for years, because of Stickelman’s tenacity, the plan is now a reality. The major expansion includes plans for an additional 34 trails, at least six more lifts, more snowmaking capability, upgraded equipment and enhanced guest facilities.

The expansion brings a much-needed boost to the Las Vegas economy by increasing winter employment at the resort from 220 to 600 people, and year-round employment will bump from 10 to 30. This also means more local jobs during construction, and more tourism dollars into the local economy.

Stickelman also understands the importance of giving back to the community, that’s why he’s spearheaded the Snow Day program that brings local school children up to LVSSR so they can experience what it’s like to put on a pair of skis or a snowboard for the very first time, all while helping them gain a better appreciation and enthusiasm for winter sports. The program also features a trip to scenic Humboldt-Toiyabe National Forest so the children can learn about ecology in the Spring Mountains.

Thanks to his creative mind and determination, lift ticket sales and season pass sales have increased, as well as skier visits and overall revenue for the resort.

Prior to joining LVSSR, Stickelman worked for its parent company, Powdr Corporation at Mt. Bachelor in Bend, OR where he served as director of guest experience. Stickelman holds professional certifications from the USSA, Professional Ski Instructors of America and National Ski Patrol. He majored in engineering at Kansas State University.