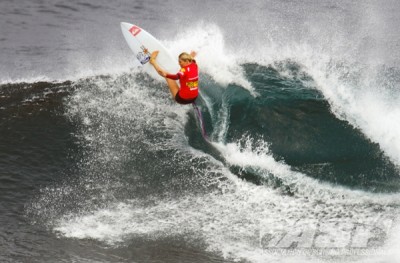 The swell dropped to the 4 to 5 foot (2 meter) range for Day 3 of the Telstra Drug Aware Pro with pristine conditions on offer. The call was made by contest officials to run three Rounds of the Women’s event and cull the field down to just the eight Quarterfinalists.

Stephanie Gilmore (AUS), four-time ASP Women’s World Champion and current world No. 1, showed once again that she’s the one to beat after she posted a near perfect 18.87 (out of a possible 20) in her opening heat at the Telstra Drug Aware Pro today. Gilmore will now come up against Nikki Van Dijk (AUS) in the Quarterfinals most likely on Saturday.

“It’s nice to surf some challenging waves for a change,” Gilmore said. “Most of the waves on the ASP Women’s World Championship Tour are beachbreaks, so to be at Margaret River surfing waves like this is amazing. It’s been hard adjusting to not having the priority system. Sometimes I feel like it’s more of a struggle to win an ASP Star event than an ASP Women’s World Championship Tour because of that. It is good fun to have more girls in the line-up though and it’s better for the people watching.”

Malia Manuel (HAW) was one of today’s standouts, consistently posting scores in the excellent range thanks to her smooth yet powerful approach. Manuel has now advanced through to the Quarterfinals and will take on Pauline Ado (FRA) when competition resumes.

“I’m excited!” Manuel said. “I surfed three times today and I’m into the Quarterfinals. With each heat I’m figuring things out and I’m more confident. It was awesome to have a heat against Steph (Gilmore), she’s my hero. It’s nice to have this type of arena on tour. I brought six boards so I was prepared for any type of conditions and I’m looking forward to the Finals.”

“I was so happy to get through my Round of 24 heat against Steph (Gilmore),” Van Dijk said. “Then to make it into the Quarterfinals is even better. I’m having so much fun here, I love Margaret River. I think when I’m having fun I do well in the contests.”

Pauline Ado (FRA) is in her second year on the elite ASP Women’s World Championship Tour, but suffered a shock early loss at the season opening Roxy Pro Gold Coast. Ado is using this event to help prepare for the up and coming Rip Curl Pro Bells.

“I had a lot of fun in my first heat today,” Ado said. “But I was really nervous for my second one because I was against Alizee (Arnaud) and Lee Ann (Curren). We are all from France and we’re used to competing against each other all the time. This year the ASP Women’s World Championship Tour is really hard and it’s great to do 6-Star evens as preparation and as a back-up.”