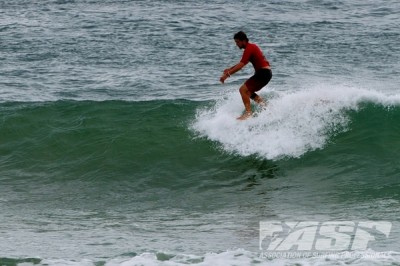 “I basically got those two off the bat, they hit the bank and walled up and I really didn’t really have to work that hard for the scores,” he said.

“I sat around for most of the heat after that as there wasn’t much coming through.

“It was typical Kingscliff with such a wide bank and it’s pretty easy to get lost out there.”

A surprise elimination on Day 1 was current Australian longboard champion Jackson Close (Currumbin, AUS), who finished third in the first heat of the day behind Jensen and Ben Dickens (Lennox Head, NSW).

In the women’s LQS division, Chelsea Williams (Tweed Heads, AUS) was the standout performer in the Round of 24 scoring 11.10 to set up a quarter-final against 2010 World Champion Jen Smith (USA) and Tessa Davidson (AUS). Other winners included Wini Paul (NZL), Melissa Combo (Ballina, AUS) and Claire Norman (Randwick, AUS).