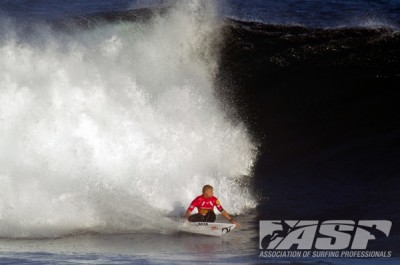 Near perfect conditions greeted surfers at Margaret River for Day 3 of the Telstra Drug Aware Pro today. 6 foot (2 meter) sets rolled into the world famous reef break, groomed by a light offshore wind, making the line-up the perfect stage for the world’s best surfers to put on a show.

Mick Fanning (AUS), two-time ASP World Champion, posted an impressive heat win this morning, and in the process notched the highest single wave score of the event so far – 9.70 (out of a possible 10).

“I was stoked the heat started right when a set came through,” Fanning said. “I just tried to stick to my game plan and I got lucky that I caught one really sick left. I took off and it had a really good wall. It sort of doubled up and I did one turn and looked back up and there was another section, then finished with a floater. I’m riding a 6’3 DHD, it felt really good out there. It’s good to be back in Margaret River.”

Kelly Slater (USA), reigning 11 x ASP World Champion, dominated the Margaret line-up in his Round of 48 heat today. Slater mixed his signature carves, tube rides and carving 360′s to amass the highest two-wave heat total of the event thus far – 17.76 (out of a possible 20).

“The waves were really nice and clean,” Slater said. “I got a couple of good waves at the start and was pretty confident I’d make it through the heat no matter what happened. So I just tried to have some fun after that. It’s double overhead out there, but I think the swell is dying off tonight and tomorrow, but then the day after tomorrow we will have another big swell.”

Willian Cardoso (BRA), fresh from a win in at the ASP 6-Star Burton Toyoya Pro in Newcastle last week, is bringing that winning form to Margaret River as he today advanced to the Round of 24. Cardoso finished 3rd at last year’s Telstra Drug Aware Pro and is thrilled to be back in WA.

“That was a great heat for me,” Cardoso said. “It was a bit slow, I only caught three waves. I’m feeling great this year I started the year with a 9th, then a win in Newcastle last week and I want to keep it going here. I love the waves here.”

Tom Whitaker (AUS) clocked two scores in the 8-point-range to easily advance to the next round. Whitaker won this event in 2008 and it’s easy to see why, he read the waves and the line-up better than anyone today.

“The waves are perfect,” Whitaker said. “You don’t get this kind of wind in WA very often. The rights freaked me out a little so I caught a couple of lefts, I even scored a tube ride which is rare for me out there. This is as good as Margarets gets.”

Josh Kerr (AUS), 2010 Drug Aware Pro event champion, today showed the style and flair that took him to the podium two years ago. In 2010 the points Kerr gained from winning this event helped him qualify for the elite ASP World Championship Tour.

“I’m feeling really good!” Kerr said. “I didn’t have any bigger boards when I got here and I was lucky enough that Rusty pulled one off the shelf and it’s been going really good. It’s super clean out there. The rights are bending back so there’s a few nice walls. It’s like snowboarding out there, you get lots of speed and power and you can push your turns.”

“From the beginning of the heat I saw that the rights looked better,” Eleogram said. “That one came and I dropped in, stayed low and came out. I just tried to not worry about the reef, then I got pounded. After I got that 9-point-ride I was really nervous because I didn’t want to be one of those guys who loses the heat with a big score.”