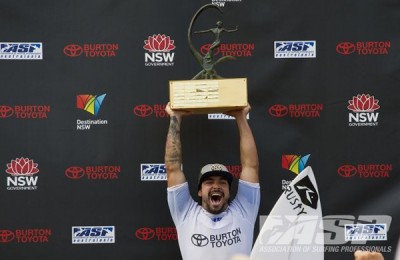 Willian Cardoso (BRA) takes home the coveted Mark Richards trophy after winning the Burton Toyota Pro over Filipe Toledo (BRA) at Newcastle’s Surfest today. Overnight the surf increased to 4 foot (1.5 – 2 meters), giving the surfers plenty of opportunity to battle it out. Cardoso has joined the elite winner’s list at the Burton Toyota Pro, and is only the third Brazilian to claim the title following in the footsteps of Adriano De Souza (BRA) who won in 2008 and Neco Padaratz (BRA) who won in 2006.

During the Final Toledo was penalised with a priority interference after dropping in on Cardoso without holding priority. The surfer who has priority gets to take any wave of their choosing and has unconditional right of way on their chosen wave. Under ASP rules when a surfer receives a priority interference only one score is counted towards their heat total and their opponent counts two. Toledo still held the lead until the dying minutes thanks to a monster air-reverse that scored a 9.50 (out of a possible 10), until Cardoso’s power gouges saw him earn a heat total of 10.61 (out of a possible 20) and surpass Toledo to claim victory.

“I’m really, really happy!” Cardoso said. “I was here and came 5th when Adriano (De Souza) won. This is so amazing for me! I was really, really nervous when Filipe (Toledo) scored the interference. I only needed a small score and I kept falling. Then I got that 7-point-ride and I knew that I had won and I was so happy.”

Toledo who posted the event’s only perfect 10-point-ride in the Semifinals, scored a near perfect 9.50 (out of a possible 10) in the final, but was overtaken by Cardoso’s top two rides. Toledo has built up a name for himself at this event, with competitors, judges and spectators in awe of the young Brazilian’s aerial skills.

“I didn’t see him there when I got the interference,” Toledo said. “It’s disappointing, but I’m happy to get 2nd in an all Brazilian Final. It’s good for my seeding because I want to do more ASP Star events this year. I really like doing airs, I’ve been training a lot and it’s working for me.”

Chris Friend (AUS) and Mitch Crews (AUS) were the highest placed Australians, both took home equal 5th place finishes after bowing out in their respective Quarterfinal battles. This is the highest Friend has finished at an ASP 6-Star rated event and he was thrilled to collect the valuable 1560 ASP World Tour ratings points.

“This is by far my best result in a 6-Star,” Friend said. “I wanted to rack up a few points in the Aussie leg so I can get into J-Bay and some ASP Prime events later in the year. A 5th is great, but I still would have loved to go all the way. I’ve felt really relaxed all week and I’ve got some good boards under my feet. I’m feeling confident and comfortable and I think it showed with some big heat scores. I had a rocky start to the year so this is a confidence booster going into the next event.”