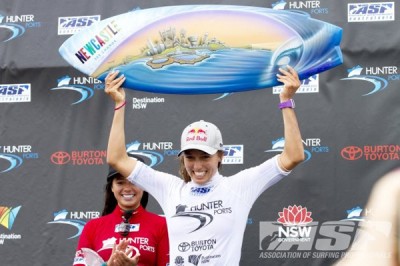 Sally Fitzgibbons (AUS) has won the ASP 6-Star Hunter Ports Women’s Classic over Malia Manuel (HAW) in 2 foot (1 meter) surf at Merewether beach, Newcastle today. The Final was a fairly one-sided affair with Fitzgibbons dominating the wave selection and execution, this is her 2nd ASP 6-Star win in a row after taking out the Australian Open in Manly in February.

Fitzgibbons, runner-up to the 2011 ASP Women’s World Title has been a standout performer at Surfest all week, posting 4 of the top 10 single waves scores of the Hunter Ports Women’s Classic. In today’s Final Fitzgibbons was clinical in her attack, executing fins free turns, perfectly timed snaps and smooth carves.

“Today was a bit of a struggle to find the good ones,” Fitzgibbons said. “I just had to pick the eyes out of it to find the best waves. The competitive rhythm is back and it’s all feeling good. The first few events this year have gone really well for me. I finished 3rd on the Gold Coast which is good, but also tough not to make the Final. There are things I’ve learned and I’ll use them at Bells. As a 13-year-old we had a Pro Junior event here at Merewether and I was just a little grommet and I took it out, so Newcastle is a special place for me.”

Manuel started the day on a high by eliminating the reigning ASP Women’s World Champion, Carissa Moore (HAW) in the Quarterfinals. In the Final however she was unable to find the open faced waves that offered up sections to execute the impressive moves she performed earlier in the day.

“I’m really happy to make the Final and rack up some points,” Manuel said. “I’d really like to stay in the top five. I’m really happy right now. I wish I could have caught a couple more waves, but either way 1st or 2nd is great for me. I’m enjoying Australia and looking forward to the rest of my time here.”

“The conditions are much more tricky with the southerly winds,” Erickson said. “There were some good little lefts, but I couldn’t find a good back-up score. Malia (Manuel) got those two good waves and surfed really consistent in that heat.”