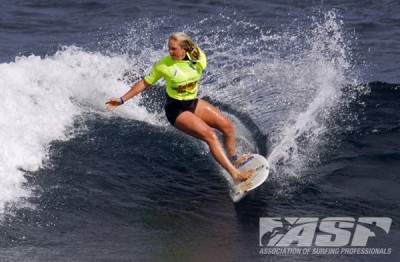 South west W.A. is swarming with the world’s best surfers who are in town for the 2012 Telstra Drug Aware Pro Margaret River. The event got underway today starting with the Women’s Round of 60, in blustery 3 foot (1.5 meter) conditions at Surfer’s Point.

Nikki Van Dijk (AUS), the 17-year-old from Phillip Island, Victoria, started the day with a convincing heat win. Van Dijk carved up the Margaret River line-up to advance to the Round of 48, where she’ll face Malia Manuel (HAW), Ornella Pellizzari (ARG) and Suelen Naraisa (BRA).

“It’s pretty slow but there’s still waves out there,” Van Dijk said. “I’ve surfed out here a few times in the past. We had Aussie titles here a few year’s ago and I was here last year for the Drug Aware Pro. Margaret River is such a fun wave, I love how you can go left or right.”

Nao Omura (JPN) posted the day’s highest single wave score, an 8.33 (out of a possible 10). Omura picked off a nice looking wave and proceeded to unleash two solid power carves to advance to the next round with Ellie-Jean Coffey (AUS) also advancing in 2nd position.

“I’m am so happy!” Omura said. “I came to Margaret River two days ago and I’m really enjoying it here. We don’t have reef breaks at home in Japan and it’s very different. I saw that good wave come and I knew I would get a good score if I made my turns.”

“The conditions are really tricky,” Hamilton said. “I don’t feel like I did all that well out there. I only really had one good turn, but I’m happy that I did enough to get through the heat because that’s all that matters in the end. I prefer reef breaks, so I’m stoked to be here, but at the same time Margaret River can be super challenging.”