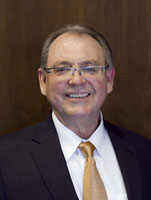 “It is a privilege to be selected to serve as the director of the Nebraska Game and Parks Commission,” Douglas said. “The wise stewardship of Nebraska’s fish, wildlife and parkland resources touches the lives of all Nebraskans in very positive ways.Douglas, currently the deputy director, succeeds Rex Amack, who is retiring in April following 45 years at Game and Parks, the last 24 as director.

“We will focus on listening to our citizens and providing the highest quality services and opportunities,” he said.

Said Ron Stave of Waterloo, commission chairman: “He has got a lot of experience, great ideas, and a great understanding of wildlife and the park system.”

Other finalists among the 17 applicants for the position were Mark Brohman, executive director of the Nebraska Environmental Trust, and Roger Kuhn, Game and Parks parks division administrator. The finalists interviewed for the job March 8, and then each met with commissioners on March 16.

Douglas, 61, has been deputy director since December 2010 after serving as wildlife division administrator since 1994. He joined the agency in 1974 as a staffer in the fisheries division.

Douglas, a native of Illinois, has a Bachelor of Science degree in wildlife biology from the University of Montana and a Master of Arts in management from Bellevue University.

In the only other item of business March 16, commissioners adopted staff recommendations for boundaries for four-zone duck hunting in 2012. A four-zone format will allow more diversity in season dates across the state than the current three-zone format. However, closed periods within seasons, commonly known as splits, no longer can be used. The four-zone format will be used through at least the 2015-16 hunting season.