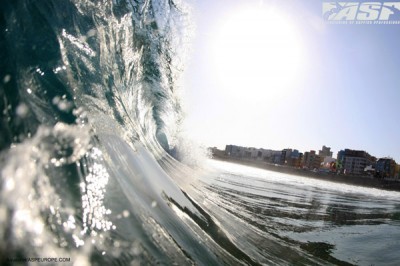 The 2012 ASP Europe Men’s Junior Tour will officially begin on May 16, the first day of the Islas Canarias Santa Surf Pro Junior, an ASP Europe 3-Star Men’s Junior event. The Canarian event will launch the 5-steps process towards a European Junior Title on the beautiful beach of La Cicer, in Las Palmas, Gran Canaria.

The 2012 Islas Canarias Santa Surf Pro Junior will be the only 3-Star rated event in this year’s Pro Junior series and therefore count the most towards the European title and qualification for the World Junior Tour.

With Medi Veminardi (REU), the 2011 European Junior Champion, too old to compete in this category any longer, the door is wide open for all the newcomers to try and get the ball rolling at the Islas Canarias Santa Surf Pro Junior and get a headstart in the race for the regional title.

“I think the Pro Junior Tour is really well structured, in 2011 we had many events in really different places,” Veminardi said. “I’m not really aware about this year’s program but anyway I think this is a mandatory tour to follow for young surfers to gain experience before they start the professional Tour. To win the European Title is incredible, it helps a lot with putting your name out there. It really improves your media attention and also attracts sponsors. This title often gives the opportunity to go onto the Star Tour and start from scratch towards qualification for the World Tour.

Jesus Aguayo, event organizer and CEO of La Santa Surf is proud to host this event, and is looking forward to welcoming the best European Junior surfers once again in Gran Canaria.

“Apart from being a huge responsibility it is an honour to be staging the most important Pro Junior event of the 2012 ASP Europe season,” Aguayo said. “Without the support from the local and regional departments of the Canary Islands it would be impossible to organize this type of event. More and more they are realising the potential that the Canaries has and that is important because they hold the key for these projects to become a reality.”

The Canary islands have been the scene for European ASP events for a long time and all the surfers love returning every year to the Atlantic archipelago. In a difficult economy for everyone, Jesus Aguayo has been developing partnerships with airlines and hotels to try to ease the financial cost of travelling to the event.

“We have come to an arrangement with Air Europe through Halcon Viajes and Hotel Cantur which will be the main centre during the event,” Aguayo said. “We have tried to offer great packages for the surfers and for the teams as well as high quality service with Halcon Viajes and Hotel Cantur. Hopefully this will help with the distances between the surfers and teams wishing to come to the event in Gran Canaria.”

The 2012 Islas Canarias Santa Surf Pro Junior was just opened to registrations to the surfers and with a little more than two months to go before the event start, Jesus Aguayo is confident that many surfers will gather to Gran Canaria.

“To any junior surfers considering taking part in the Islas Canarias Santa Pro Junior I would not hesitate in entering this magnificent event to be held in La Cicer and to also enjoy all the attractions of this great city,” Aguayo continued.