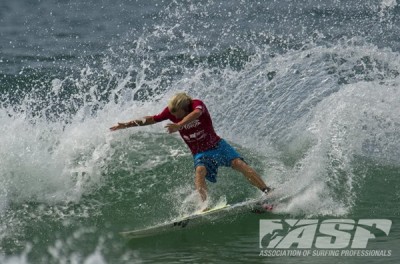 The field of more than 200 competitors has been culled to just 28 at Newcastle’s Surfest. The ASP 6-Star Burton Toyota Pro is down to the final 16 and the ASP 6-Star Hunter Ports Women’s Classic decided the Quarterfinalists in 2 foot (1 meter) surf at Merewether today.

Adrian Buchan (AUS) today established himself as one of the front-runners for the Burton Toyota Pro crown after posting the highest heat total of the event thus far – 18.50 (out of a possible 20). Buchan blew up in the small left-handers, using his power carves to easily advance to the Round of 16 where he’ll face Evan Geiselman (USA).

“When you win like that it’s good for your confidence,” Buchan said. “Over the last few days I’ve felt good without positing big scores, so I knew it would come. I spend most of the year going right on the ASP World Tour, so it’s refreshing to go left. It’s a fun wedgy little left and I seemed to be in the right spot for two good ones. It was a stacked heat with Matty (Banting) and Tom (Whitaker), it was a good one to get through.”

Taj Burrow (AUS), Adam Melling (AUS) and Jay Quinn (NZL) battled it out in the heat of the day and finished 1st, 2nd and 3rd respectively. All three surfers held the lead at different stages of the heat, but it was Burrow who locked in a 6.97 (out of a possible 10) at the end of the heat, to see him jump into first position.

“I was struggling out there for sure,” Burrow said. “None of us felt safe with the lead changing over and over. We were all posting mid-range score so it was there for the taking the whole heat. I’m glad to get through that one because I don’t like the three and four man heats. It’s man-on-man from here on out and I’m looking forward to it.”

Paige Hareb (NZL) posted the highest wave score of the day 9.27 (out of a possible 10) in her Round of 12 battle at the Hunter Ports Women’s Classic. Hareb took advantage of the rippable lefts on offer, executing two massive gouging turns and a massive lip-line floater on the end section.

“We were paddling in the rip for a while,” Hareb said. “I tried to get the inside position and then a really good one came through. I was a little bit lucky because it went all the way to the beach. I was feeling pretty relaxed out there. I was looking at the draw and the top half is all ASP Women’s World Championship Tour surfer, so it’s going to be tough from here on.”

Sally Fitzgibbons (AUS), runner-up to the 2011 ASP Women’s World Title continued to impress at the Newcastle’s Surfest today. Fitzgibbons posted a 9.10 and an 8.33 (out of a possible 10) to advance to the Quarterfinals where she’ll face Alizee Arnaud (FRA).

“The surf is about the same size as yesterday,” Fitzgibbons said. “But the waves have less power so it’s pretty tough out there. In those three man heats it’s good to get an early lead and leave the other girls to hassle for 2nd. I think the swell is expected to be a bit bigger tomorrow, so I’m excited for Finals day.”