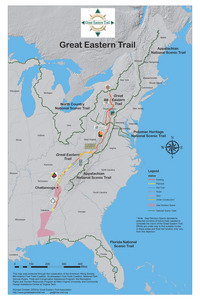 Woolrich, the Original Outdoor Clothing Company, is working with the Great Eastern Trail Association (GET), its trail affiliates, and industry partners to maintain and complete the braided walking trail that connects some of the most challenging and beautiful hiking trails stretching from Alabama to New York.

The 1,800 mile long GET is currently about seventy-five percent complete. The trail has several gaps where new trails need to be blazed to link the existing trails. Woolrich maintains a portion of the GET that runs through the middle of its hometown via the Mid State Trail.

“As hikers, too often we take for granted the trails we travel and don’t think about what it takes to maintain or build them,” said Brent Hollowell, Woolrich VP of Marketing. “Trails don’t blaze themselves, and we hope that we can help local clubs mobilize volunteers and make the Great Eastern Trail a reality.”

Late last fall Woolrich brought together leadership from the Great Eastern Trail Association, the Keystone Trail Association (KTA),Backpacker Magazine, and other GET associated clubs for a summit in Woolrich, PA. The attendees devised a strategic plan to help with trail maintenance and promote awareness of the trail.

“Woolrich has stepped up as a leader in helping us realize the completion of the trail,” said Tom Johnson, President of Great Eastern Trail Association. “We appreciate the additional visibility their efforts have brought to the GET and we are sure the positive attention will lead to more volunteers assisting with the actual maintenance work and development of the trail system.”

Along with providing volunteer gift bags, including a trail work t-shirt, Woolrich hiking socks, and more, Woolrich is supporting its local trail organization, the Keystone Trail Association as the official sponsor of its Trail Care Days.

To further increase awareness of the trail Woolrich is collaborating with its long time partner Backpacker Magazine. Woolrich has developed a series of advertorials focusing on the GET that began appearing in the publication in February.

Backpacker is integrating content related to the Great Eastern Trail into the presentations of its popular national mobile tour, the Get Out More Tour, which stops at retail stores, events and festivals to educate consumers about the skills and equipment needed to enjoy the outdoors while inspiring healthy, active lifestyles.

To learn more about the trail, participating trail clubs, donate or volunteer for a trail maintenance day visit www.greateasterntrail.net.