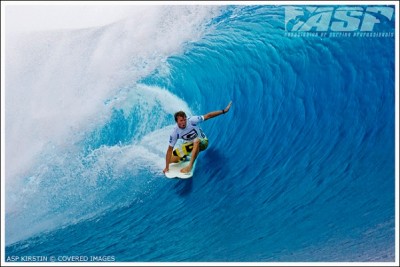 The world’s best surfers are midway through the Australian leg of the 2012 ASP World Championship Tour and fans have already born witness to unprecedented levels of high-performance surfing, but come June, the Volcom Fiji Pro will send the ASP Top 34 to the idyllic isles of Fiji where they’ll do battle in the ultimate Dream Tour venues of Cloudbreak and Restaurants.

“We are starting to get real excited about the event as June is just around the corner,” Brad Dougherty, Volcom VP of surfing, said. “Fiji is a very special place and we are ecstatic to now be part of the WCT. The Volcom Fiji Pro exemplifies the ‘Dream Tour’ concept that we believe so much in.”

“Volcom’s decision to bring the world’s best surfers back to one of the most iconic locations on the planet provides the perfect addition to ASP International’s solid stable of elite events in 2012,” Matt Wilson, ASP International Contest Director, said. “Volcom have planted their flag at two of the very best waves on the planet with their ASP 5-Star at Pipeline and now the Volcom Fiji Pro and it’s something that the surfers, the industry, the media and the fans are all very excited about.”

The ASP Top 34, the world’s elite campaigners in the hunt for the ASP World Title, are ecstatic about returning to Fiji after a three-year hiatus. Gold Coast stable mates Joel Parkinson (AUS), 30, 2011 ASP World Runner-Up, and Mick Fanning (AUS), 30, two-time ASP World Champion, are particularly eager to reunite with their respective extended families as well as Fiji’s incredible surf.

“I am so amped to be going back to Fiji,” Parkinson said. “It is my favorite place of all time. The waves, the people and the food – it epitomizes what the ASP Dream Tour is and should be. I can’t wait for the event.”

“I’ve really missed the Fiji event,” Fanning said. “Cloudbreak and Restaurants are, without a doubt two of the best waves on earth so having Volcom bring an event back to Fiji is insane. I’ve never had a bad trip to Fiji. The place rules! The locals are classic, the fishing is awesome, the waves are perfect and I’m stinging to get back there!”

Adriano de Souza (BRA), 25, current ASP World No. 2, is leading the South American charge in 2012, and the well-versed natural-footer is relishing the opportunity to return to Fiji – a locale where he has had success in past seasons.

“I had a blast at the last event we had in Fiji,” De Souza said. “I got 3rd place and I had a great time in Tavarua. For sure, I can’t wait to see the all crew from Tavarua again. Both waves, Cloudbreak and Restaurants, are amazing. I hope this event pushes other companies to run contests in similar venues as this is what surfing is all about.”

While tour veterans will be looking to dig their claws back into the Fijian perfection of Cloudbreak and Restaurants, the 2012 rookie class will get their first crack at these South Pacific reef passes.

“I’m really psyched that Fiji is back on the schedule for my rookie year on the ASP World Championship Tour,” Kolohe Andino (USA), 17, 2012 ASP Top 34 rookie, said. “I grew up watching my heroes battle it out at Cloudbreak and Restaurants, and to have the opportunity to join the tour, and get to compete there myself is really why I do this – to live out my dreams.”

The next stop on the 2012 ASP World Championship Tour will be the Rip Curl Pro Bells Beach presented by Ford Ranger from April 3 – 14, 2012.