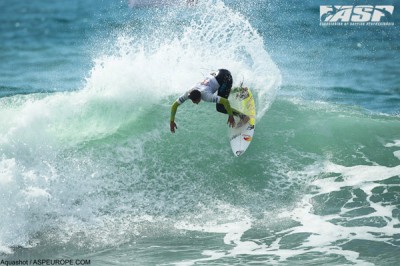 The 2012 edition of the Swatch Girls Pro France has been confirmed and will return to the beautiful beaches of Hossegor / Seignosse from May 30 – June 3, 2012. The ASP 6-Star Women’s event and 2-Star Women’s Pro Junior event will kick-off the Women’s campaign in Europe and host some of the most talented surfers in the world.

The Swatch Girls Pro France will enter its third edition and is already established as one of the strongest Women’s events in the World. In the past, the likes of 4x World Champion Stephanie Gilmore (AUS), World Tour runner-up Sally Fitzgibbons (AUS) and many more up-and-coming talents have entered the event and showed that the Swatch Girls Pro France is an event not to miss.

“The Swatch Girls Pro France marks the beginning of the season in Europe and most of the best women surfers in the World will attend with only one goal: the World Title. The level has dramatically increased these last few years, and I think the girls really challenge the men’s now by adding a fresh and glamorous approach to an almost similar technical level ! For me, the revolution is on its way !» says Julie Audibert, the event organizer.”

The beautiful South-Landes region of Hossegor / Seignosse is a premium choice for a surfing event and will host once again the Swatch Girls Pro France. This stretch of 5 kilometers of perfect beachbreak setups is known as a surfing jewel in Europe and often delivers pristine conditions especially in Spring and Automn when the swell and winds are favorable.

Coco Ho (HAW) finalist in 2010 of the Main event will be back to try and climb one more spot on the rankings this year.

“Im really looking forward to returning to Hossegor for the Swatch event as it take place in one of the most historic surfing towns with fun waves and lots to do and see. Swatch makes this event especially unique by giving the women surfers amazing support and a strong platform to showcase our skills as athletes.”

With less than a dozen events worldwide on the Women’s Star Tour, the Swatch Girls Pro France is every year an important milestone in the calendar for all the hungry up-and-comers trying to qualify for the coveted ASP Women’s World Tour. Precious ranking points are on offer and the battle is always hard fought for a piece of the $40,000 prize-pool.

Bruna Schmitz (BRA), a former Women’s World Tour surfer will be part of that chase for points and prizemoney when the event returns.

“The Swatch Girls Pro is definitely my favorite event of the year, first because i love France, its like my second home and second because the event is very well organized, the structure is so well made it, with amazing meals during the day, and everyone is able to watch the comp inside the athletes area because the structure allows us to do so, waves are fun, and everyone seems to have fun there, i just love this event.” Bruna said.

The Swatch Girls Pro France also offers a Pro Junior event reserved to the surfers under 21 years of age, and is the occasion to discover the new young guns that will be surfing’s future. Every year the women’s level is stepping up and a Junior event is the perfect path for all future stars of the sport to follow. As an example, Laura Enever (AUS), Coco Ho (HAW) and Courtney Conlogue (USA) were all three in the final of the Swatch Girls Pro Junior in 2010 and are now full time residents on the ASP Women’s World Tour.

European surfers have recently started to impress more and more on the international stage and the Swatch Girls Pro France will also give the occasion for all European competitors to gauge their level against some of World’s best, and try to conquer the Swatch Girls Pro France Title that has since its beginning been won only by Australians, Stephanie Gilmore in 2010 and Sally Fitzgibbons in 2011.
Pauline Ado (FRA), one of the two French surfers on the Women’s World Championship Tour in 2012, and part of the Swatch team, will enter the event for the third time with hopes of making a good result with a strong homefield advantage.

“The Swatch Girls Pro France is one of the best stops in the World for Women’s. The event itself is amazing and we’re treated so well, and also because the coast and the waves are incredible. I especially love it because I don’t get many occasions to surf at home with my entourage and sponsors supporting. Every year I’m really looking forward to this event.” Says Pauline.

The 2012 Swatch Girls Pro France will run from May 30 to June 3 in Hossegor / Seignosse, France. To find out more, please visit www.aspeurope.com