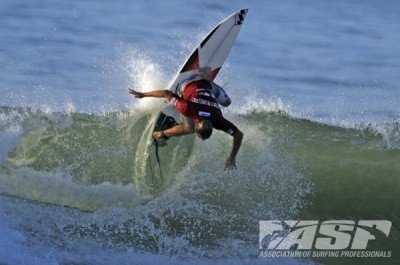 Merewether once again played host to an array of the world’s best surfers as the ASP 6-Star Burton Toyota Pro hit the water for the Round of 96, the Round that sees the top seeds enter the draw. The surf was in the 2 to 3 foot (1 – 1.5 meter) range with some nice walls and rippable sections on offer.

Taj Burrow (AUS), current No. 1 on the ASP World Championship Tour, continued his devastating run-of-form from his win on the Gold Coast into his Round of 96 heat at the Burton Toyota Pro. Burrow picked a number of small runners and launched into a series of his signature airs and fins free snaps to amass two scores in the 8-point-range (out of a possible 10) to easily advance to the Round of 48.

“I’m pretty happy with those scores,” Burrow said. “They felt like good turns, but I didn’t know I’d get scores that big. I’m stoked they rewarded them. The two sections I got were sick for throwing your tail out, it was pretty fun. It was hard to get up for the early start, but I woke up when I hit the water.”

“I just tried to find the good waves out there,” Muscroft said. “I was lucky enough to find two decent waves that allowed me to open up. I’ve been coming to Newcastle for years and I love it. It’s a cruisy town with lots of waves. I always have a good time here.”

Filipe Toledo (BRA) has had Newcastle talking for the past week after what the locals are calling ‘the best wave ever ridden at Surfest’ during the CHIKO Pro Junior. Toledo impressed again today with some clean aerials and smooth carves.

“That was so hard,” Toledo said. “Shaun Joubert, Glenn Hall and Cesar Aguiar surf so good. The Pro Junior was a great warm-up for this 6-Star. I’m just trying to stay relaxed and enjoy my surfing. Newcastle has been really fun. It’s my first time here and I’m enjoying traveling and surfing with my dad and friends.”

Jay Quinn (NZL) used his stylish rail and aerial game to post some excellent scores and advance to the Round of 48. Quinn will now face Krystian Kymerson (BRA), Shaun Joubert (ZAF) and Alan Donato (BRA) when competition resumes.

“I’ve been here for four days and that was my first surf,” Quinn said. “It took me while for me to get a good wave, but it all worked out for me in the end. It was a pretty good heat for me. This is a good place to have an event because it rarely goes flat at this time of the year. Even when it is small you can still fit in a couple of turns.”

“I’ve never been a good hassler,” Whitaker said. “Those guys hammered me at the start and I just got out of there and paddled down the beach. I’m washed up, so I’m just cruising at this event and helping a few of the Oakley kids. It’s not do-or-die for me anymore, I just drove up from Sydney to surf some heats and have some fun.”