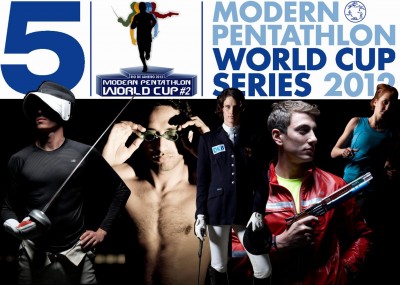 With World Cup #1 over, the world’s best Pentathletes head south to Rio de Janeiro for World Cup #2 which starts Thursday 15 March 2012 and runs until Sunday 18 March.

International Modern Pentathlon will be returning to Brazil for the first time since the highly successful 2009 World Cup Final and the Pentathletes are excited to get a chance to acclimatise to the city which will host the 2016 Olympic Games.

Rio de Janeiro has a large experience in organizing modern pentathlon competitions, having hosted the 2009 World Cup Final, the 2007 Pan American Games and the 2011 World Military Games in recent times. All these event, like Word Cup #2 will take place at the beautiful Deodoro Sports Complex.

UIPM Secretary General Joël Bouzou: “UIPM is very pleased to be starting the journey to Rio 2016 this week. We are able to test out personal and procedures from now to make sure the 2016 Olympic Modern Pentathlon event is a huge success.”

Double Olympic Champion Andrei Moiseev will hope that the Olympic spirit engulfing Brazil can give him a lift after his disappointing showing at World Cup #1 where he failed to make the final. The big Russian will be pushed by his 2 team mates in form, Ilia Frolov & Aleksander Lesun who won gold & bronze respectively in Charlotte.2011 World Cup Final Champion Robert Kasza (HUN) is eager to make up for lost time as he missed World Cup #1 due to injury as he gets his Olympic campaign underway.

The big story of the World Cup will be the return of triple World Champion Amelie Caze (FRA). All eyes will be on the Frenchwomen as she competes for the first time since the 2011 European Championships. World Cup #1 winner Lena Schoneborn (GER) said “I am desperately trying to keep this momentum going from my gold in Charlotte and hope I can have more success in Rio”. World Champion Victoria Tereshuk (UKR) and Laura Asadauskaite want a quick bounce back after they failed to stand on the podium last weekend.

The local Brazilian public will be out in force to urge on their hero Yane Marques (BRA). The Brazilian who has already secured her Olympic Qualification is yet to taste victory in a World Cup and this would be the perfect stage to do so.

Fans around the world will have the chance to watch these and other great athletes live and share in the excitement of Modern Pentathlon. UIPM will broadcast the finals live on Pentathlon TV at pentathlon.org on 17 & 18 March 2012.  The broadcast will feature the combined event & medal ceremony live and highlights of the fencing, swimming and ride.

The Brazil World Cup is the second in a series of 5 events in the coming three months which will culminate in the World Cup final to be held in Chengdu, China on 26-27 May 2012.
Competition Schedule:

Will Moiseev bounce back from a disappointing World Cup #1? Will Marques thrill the locals and get onto the podium? Will any Caze’s return break the domination of Schoneborn. Let’s see… Come and back your national heroes and visit the second World Cup of the season at Rio de Janeiro, Brazil or visit our website at pentathlon.org.