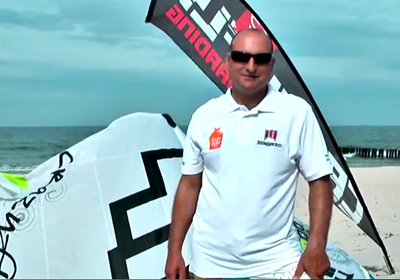 In some awe-inspiring and jaw-dropping “man vs. wild” news, a kitesurfer was recently pulled from the Red Sea after being stranded for almost 40 hours and fighting off several sharks that came looking for an easy meal.

Jan Lisewski, a world-class kite- and windsurfer attempted to cross the Red Sea from El Gouna, Egypt to Duba, Saudi Arabia by kite surfing. Reuters reported that the 42-year-old from north Poland was two-thirds (about 82 miles) of the way across the Red Sea when winds died and his kite deflated.

He became shark bait to giant Red Sea sharks. When they attacked, Lisewski stabbed the sharks in the eyes, nose and gills with a knife, successfully fending them off. His friends, family, sponsor Nobile and the Polish Kiteboarding Society joined in the search and rescue of Lisewski who was out on the water by himself. The Arabian Lifeguard was notified of his predicament, but even after Lisewski sent out an SOS message and occasionally sent out GPS signals, they could not locate him. Finally Saudi authorities found him some 60 km off the coast 40 hours into the search according to epikoo.com.

For two grueling days he survived on energy bars, energy drinks and what little water he had left that ran out on the first day. This was his second attempt at a distance this large. In 2011 he successfully kitesurfed from Swinoujscie in Poland across the Baltic Sea to Ystad, Sweden.

Below is NMANewsDirect’s virtual take on the stranding, shark attack and subsequent rescue of Jan Lisewski.