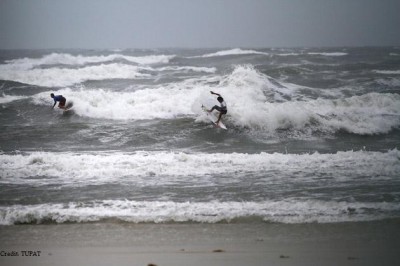 Igarashi put on an iron-man performance at the DNA Energy Pro Junior, marching from Round 1 to the final despite the challenging conditions to pick up his first ASP victory. The young Californian was a standout throughout the event’s entirety, winning five out of six heats including his commanding presentation in the final.

“I couldn’t hear anything out there and we were all asking each other if we could here out there,” Igarashi said. “This is the strongest wind I’ve ever felt in my life and it’s in a contest. It is what it is and I’m super stoked that I won.”

Igarashi felt at home in the wind-blown Florida conditions reminiscent of his Huntington Beach training grounds and was elated to walk away with DNA Energy Pro Junior victory and the crucial points towards his seed on the ASP North America Pro Junior Series.

“I surf Huntington a lot and it’s windy too,” Igarashi said. “It’s not this windy, but it’s a beachbreak like here and I get to practice in similar conditions and I had a great board for this event. I had no idea I was going to win this. I knew that I could, but before I came here I wasn’t feeling like I was going to win, I just wanted to do well and make some points. Once I made a lot of heats I put my head to it and started thinking I could do it. I started first round, so I just took that as a momentum builder.”

Daniel Glenn also started in Round 1 and charged his way to the final compliments of his committed surfing and intimate knowledge of the New Smyrna Beach Inlet. Glenn jumped out to an early lead in the Final, but fell just short of the win and finished runner-up overall.

“I knew I had one good wave and thought I had another, but it was hard to hear in the heat,” Glenn said. “I started in Round 1 because I didn’t have a lot of points and Kanoa and I definitely surfed a lot of heats. We didn’t have the best conditions, but we made it work.”

Evan Thompson was dangerous on the final day of DNA Energy Pro Junior competition, notching the day’s highest scores of 8.00 (out of 10) and 15.83 (out of 20) in the Semifinals, but was unable to surpass Igarashi in the Final. Thompson finished 3rd overall and is looking to carry his early-season success to the West Coast for the upcoming Vans Pro Junior later this month.

“I’m stoked to make another final, but it’s always a bummer when you make it that far in an event and don’t win,” Thompson said. “Hopefully I get a few more chances this year because I haven’t won one yet. It’s been my goal for a long time. I’m stoked I got third and it’s a confidence booster going into Huntington. That’s the main goal. This event has been such a good warm up and having it so close to my home, there was no reason for me not to go. It’s been a fun week.”

Ryan Croteau, who has recently relocated to California from Florida, had a breakthrough performance at the DNA Energy Pro Junior, making his first career-final while finishing 4th overall. Croteau is also hoping to carry his form over to the next event on the ASP North America Pro Junior calendar.

“I moved to California two years ago and it’s definitely helping my surfing,” Croteau said. “It feels good to make my first Final and it was so stormy and windy. I was getting longer waves, but I couldn’t nail a big maneuver and didn’t get the scores. I’m going to go home and train and get ready for the Vans Pier Classic later this month.”

The next stop on the 2012 ASP North America Pro Junior Series will be the Vans Pro Junior presented by Jack’s Surfboards, which will run from March 28 through April 1, 2012.