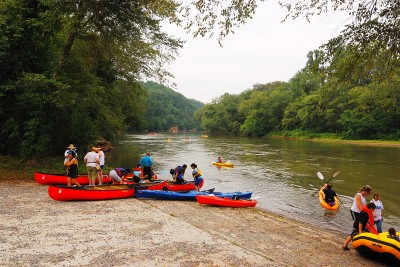 Secretary of the Interior Ken Salazar announced the designation of a new water trail system across the United States last week. The National Water Trails System will be a new network of waterways that will increase access to water-based outdoor recreation, encourage community involvement in clean waterways and conservation and promote tourism to these places.

The rivers and other waterway trails soon to be designated National Water Trails will become the newest addition to the class of national recreational trails under the National Trails System Act of 1968.

Secretary Salazar, who signed the secretarial order to establish these trails under the Act, said in a web conference the Chattachoochee River in Georgia will be the first National Water Trail to be designated.

“That is a 48-mile stretch of river which now is used by 3.2 million people in a variety of different ways,” Salazar said. “It’s a wonderful example of what we can do with our rivers when a community embraces them, and looks to them for all of the benefits that brings to conservation, as well as the economics of the local community and the health of the community.”

Today’s announcement comes in advance of Friday’s White House Conference on Conservation hosted by the Department of the Interior. The conference will spotlight community-driven conservation efforts as part of President Obama’s America’s Great Outdoors Initiative.

“Rivers, lakes, and other waterways are the lifeblood of our communities, connecting us to our environment, our culture, our economy, and our way of life,” Salazar said. “The new National Water Trail System will help fulfill President Obama’s vision for healthy and accessible rivers as we work to restore and conserve our nation’s treasured waterways.”

Secretary Salazar signed a Secretarial Order (pdf) that establishes national water trails as a class of national recreational trails under the National Trails System Act of 1968. The order sets the framework for Secretarial designation of water trails that will help facilitate outdoor recreation on waterways in and around urban areas, and provide national recognition and resources to existing, local water trails.

“The Corps will actively participate, working with many local partners, to develop the water trails system and connect people to the water resources close to their homes,” said Jo-Ellen Darcy, Assistant Secretary of the Army for Civil Works. “The National Water Trails System will recognize and promote local efforts at a national level.”

Today, Secretary Salazar also announced that the Chattahoochee River Water Trail in Georgia will be the first river to be designated as a National Water Trail under the new system. The water trail travels through 48 miles of river within the Chattahoochee River National Recreation Area. The park serves 3.2 million visitors annually, most from the local Atlanta metro-region. In addition to providing over 65% of the public greenspace in this urban region, the river provides most of Atlanta’s drinking water. The park and new water trail contain 18 developed public access points and connects with other local city and county parks. The river is heavily used by anglers, tubers, kayakers, canoers, and rafters.

“The Chattahoochee River Water Trail provides clean water, greenspace, and river access for millions of Americans every year,” Salazar said. “As our nation opens a new chapter on rivers – one where we value our waterways for their recreational, economic and ecological importance – it is fitting that the Chattahoochee River Water Trail leads the way.”

With each designation, signage, technical assistance and resources will be provided to build on and promote the development of quality water trails. Water trails that are designated can become catalysts for restoring the health of local waterways throughout the community.

Under the Secretarial Order, the National Park Service will coordinate the national water trail nomination process.