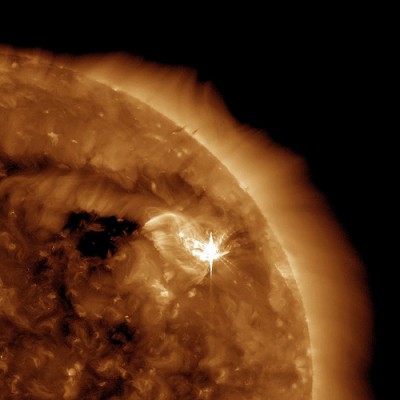 Star gazers and survivalists, brace yourselves: according to information released by NASA, the largest solar storm in five years is set to hit the Earth Wednesday night or Thursday morning, if you’re in the United States.

Two solar flares occurred Tuesday evening within roughly an hour of each other. Accompanying these flares, the sun sent out two coronal mass ejections (CMEs), which may cause the geomagnetic storms that will affect the Earth.

So before you jump for your new green zombie gun equipped with a biohazard-reticled EOTech sight in anticipation of apocalyptic consequences, what does all this mean?

Probably not much in terms of world-ending ramifications. The resulting geomagnetic storms have the potential to disrupt flight paths over the Arctic, temporarily interrupt GPS signals, cause auroras at lower latitudes than normal (as low as the Great Lakes), disrupt radio communications and maybe even mess with power grids. Unfortunately for sky watchers, there will be a full moon tonight, obscuring most of the auroras from anyone outside of the highest global latitudes.

If you planned on hiking out into the backcountry tonight with only a GPS in your pack to find your way back, you may want to think again. But other than negatively impacting techno-dependent campers, it looks like this solar storm might not be all that worrying.